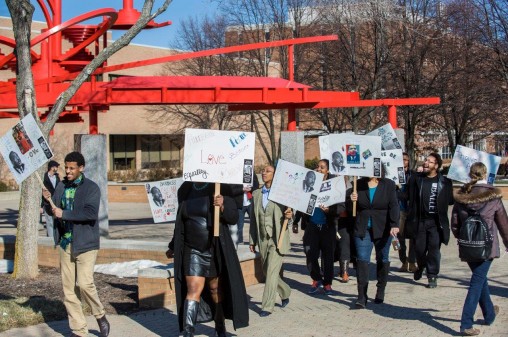 Martin Luther King Jr.’s principles of nonviolence were remembered at Wright State as part of the university’s annual unity march to commemorate the achievements of the late civil rights leader.

The Jan. 20 event included students, faculty and staff who marched from Millett Hall and made stops at Allyn Hall, the Student Union and the Creative Arts Center in what were called the four corners of peace and justice.

The group carried signs emblazoned with phrases such as “Keep the Dream” and “Anything is Possible if You Believe.”

At each stop, several of King’s nonviolence principles were highlighted. At the Allyn Hall stop, participants discussed ways to change the community for the better such as taking personal responsibility for each other.

Gabriel Willis, a psychology/biology major from Dayton, said it is crucial to remind people of King’s achievements because it shows how much progress society has made, but how hard that was. 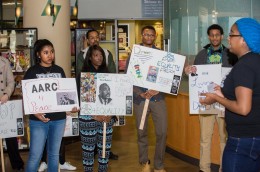 “It’s important to remember that we don’t have to respond with violence,” Willis said. “I feel like people talk about it a lot, but they don’t ever learn from it. They don’t ever figure out how to take these lessons and implement them in our community in a way that helps further us in our causes.”

King, a clergyman, activist and prominent leader of the African-American civil rights movement, received the Nobel Peace Prize for his efforts to end racial discrimination. He was assassinated in 1968. In 1986, Martin Luther King Jr. Day was established as a federal holiday.

King wrote the letter on April 16, 1963, defending nonviolent resistance to racism. It became an important text for the civil rights movement. A panel discussion will be held after the screening.