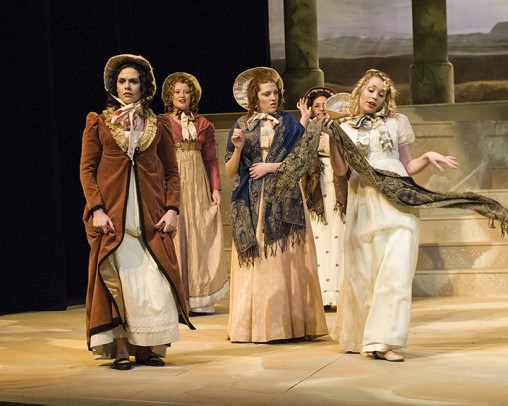 Wright State Theatre’s production of “Pride and Prejudice” opens Jan. 29 and runs through Feb. 8 in the Festival Playhouse in the Creative Arts Center.

All of the wit and romance of Austen’s classic 1813 novel come to life in this fast-paced and engaging adaptation. Jory’s adaptation of “Pride and Prejudice” premiered in 2005 in Tucson as a co-production between the Arizona Theatre Company, San Jose Repertory Theatre and Atlanta’s Alliance Theatre.

More than 90 percent of the language in the play comes directly from Austen’s novel, and the characters narrate events to the audience.

As the producing director at Actors Theatre of Louisville for 32 years, Jory directed over 125 plays and produced over 1,000. He currently teaches acting and directing at the Santa Fe University of Art and Design.

“Pride and Prejudice” is directed by Marya Spring Cordes (“The Cherry Orchard,” “Grand Hotel”). The set is designed by Julie Allen (“The Cherry Orchard”), lighting by Kody Lupori (“The Wild Party”), costumes by Dave Castellano (“The Magic Fire”), properties by John Lavarnway and sound by James Dunlap (“Les Miserables,” “Oklahoma!”).