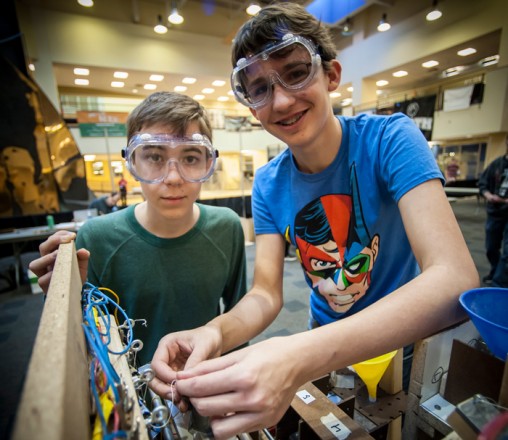 The tournament was held in 10 campus buildings and one softball field on Feb. 7. It attracted about 1,500 students and an estimated 400 coaches and family members to Wright State.

Science Olympiad is a national nonprofit organization whose mission is to improve the quality of science education, increase interest in science, attract more students to science careers, foster teamwork, emphasize the problem-solving aspects of science and develop a technologically literate workforce.

In “Bungee Drop” students drop a mass attached to an elastic cord as close to the ground as possible.

Students set up their egg-carrying vehicle in “Scrambler.”

Students set up their entry in “Wheeled Vehicle.”

Many Wright State students volunteered at the Science Olympiad Invitational.