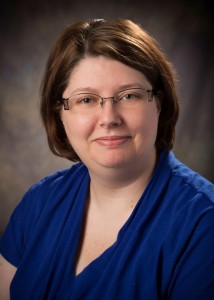 She has helped turn the Baltimore Orioles into a science project. She plans to make fossil-filled quarries more user friendly for schoolchildren. And she is creating a virtual tour of the only national wildlife refuge established to support wildlife research.

These projects have sprung from Wright State alumna Beverly Stambaugh’s service as an Albert Einstein Distinguished Educator Fellow, a coveted honor that has her working with the National Science Foundation in the Washington, D.C., area.

Stambaugh, who has three master’s degrees from Wright State and teaches STEM science at Baker Middle School in Fairborn, says she is sponging up the fellowship experience, which began in September and ends in July.

“I have been networking with the fellows; I have new project ideas,” she said. “I’ll be able to enhance what I teach. I’ll be able to make it deeper, richer, more engaging.”

Stambaugh says the fellowship has strengthened her knowledge of STEM science, engineering and math teaching and the elementary school learning process. And it has been a springboard for new projects.

Stambaugh and three other fellows are working to improve student test scores in science with the project involving the Baltimore Orioles baseball team. The fellows have written lesson plans on the science of groundskeeping, the physics of baseball pitching, batting helmet safety and the climates at various ballparks.

“We’re trying really hard to engage the kids with something that is homegrown and interesting,” she said.

The Orioles plan to take the lesson plans with them to spring training in Sarasota, Fla., and have them tested in the schools there before using them in Maryland. Stambaugh said there is no reason similar lesson plans couldn’t be developed using the Dayton Dragons and Cincinnati Reds.

She also hopes to collaborate with a professor from Mississippi State University to improve signage at fossil-filled parks and quarries to make them more engaging and educational for schoolchildren.

In addition, Stambaugh is creating a virtual field trip to the Patuxent Wildlife Research Center in Maryland after seeing it for herself as part of her fellowship. She is currently collecting content for the site and working with web teams from the U.S. Geological Survey and the Fish and Wildlife Service.

With land surrounding the Patuxent and Little Patuxent rivers between Washington, D.C., and Baltimore, the refuge has grown from the original 2,670 acres to its present size of 12,841. Its mission is to conserve and protect the nation’s wildlife and habitat through research and wildlife management techniques.

The program provides an opportunity for accomplished K-12 educators in the fields of science, technology, engineering, and mathematics (STEM) to serve in the national education arena.

Fellows spend 11 months working in a federal agency or in a congressional office, bringing their knowledge and experience in the classroom to education program and/or education policy efforts.

In working with NSF, Stambaugh has attended congressional briefings on the reauthorization of Elementary and Secondary Education Act and provided input to various foundation panels that review the merit and impact of grants.

“Understanding that K-12 realm for undergrad teachers gives them a perspective of how they might have to adjust the way they teach in class, the way they do assessments,” she said. “So it’s nice to be able to give them my point of view. You have to start at pre-K and kindergarten to build those skills that you want students to have as undergrads and grads.”

Stambaugh has also teleconferenced with geoscientists and geoscience education researchers to develop collaborations between the two groups. And she attended a Geological Society of America conference in Vancouver to get an update on the science and how professors are trying to make field experiences more enriching.

Stambaugh grew up in the tiny northeast Ohio town of Rittman. Her father was a computer programmer for The Babcock and Wilcox Co., which currently supplies clean-energy technology and services primarily for the nuclear, fossil and renewable power markets.

Stambaugh took an early interest in geology. Her grandfather owned 55 acres in Holmes County, and the family built a log cabin on the property.

“I grew up tramping around the woods,” she said. “We were always down in the ravines, walking around and looking at the rocks.”

Stambaugh obtained her bachelor’s degree in geology from Marshall University in 1996 and spent several years Houston.

She returned to Ohio in 1998 and enrolled at Wright State, where she got three master’s degrees — in petroleum geology, secondary education and education leadership.

“Teaching is something I’ve wanted to do as far back as I can remember,” she said. “But the science was very interesting to me.”

Stambaugh began teaching at Baker in 2000 and over the years has been an adjunct instructor at Wright State, teaching geology, remote sensing, foundations of science literacy and physics for education majors.

In addition to her teaching duties, Stambaugh finds time to be a Girl Scout leader. She also helps her church organize and run an annual backpack drive in which hundreds of backpacks filled with donated school supplies are distributed to needy children.