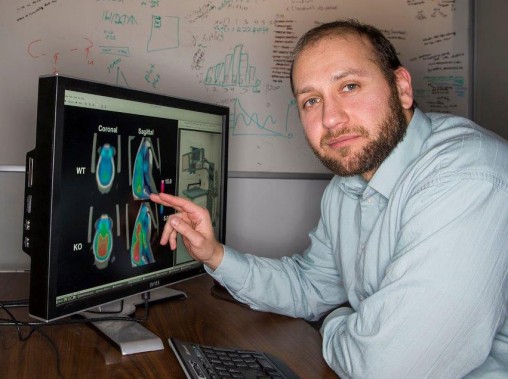 Assistant engineering professor Nasser Kashou will be one of several researchers with access to Wright State’s new PET/CT scanner, putting the university at the forefront of medical-diagnostic research. The scanner will be housed in the new Neuroscience Engineering Collaboration Building when it opens in April.

When it arrived at Wright State University, assistant engineering professor Nasser Kashou, Ph.D., put his arms around it.

“I started to hug it,” he said. “As an engineer, you love this technology.”

The technology is a PET/CT scanner, which marries positron emission tomography with computed tomography.

Wright State is only one of a few universities that have the sophisticated body-scanning technology, which is at the forefront of medical diagnosing. It holds out the promise of helping find causes and treatments for cancer and neurological diseases such as epilepsy.

“It’s a beautiful system. It just opens up a whole world of opportunities we didn’t have before,” Kashou said. “This is such a great acquisition, achievement.”

The PET/CT scanner, valued at $800,000 new, will be housed in Wright State’s new Neuroscience Engineering Collaboration (NEC) Building. The unique facility, which will enable neuroscientists, engineers and physicians to work side by side, is scheduled to open in April.

CT scanners use computer-processed X-rays that enable users to see inside organs and tissues without cutting into them. They provide high-detail images of bone structures and soft tissues such as the heart.

PET scanners produce three-dimensional images of functional processes by detecting radionuclides introduced into the body. The scanners track the uptake of glucose, which can identify cancerous lesions and tumors or detect where in the brain a stroke occurred.

The PET/CT scanner is pre-clinical, meaning it will be used on mice and rats. It will enable neuroscience researchers to look at living functions instead of post-mortem slices of animal organs.

“The main thing is they can image the animal while it’s alive and see how the animal functions based on some specific stimulus,” Kashou said. “We could look at different types of seizures, epilepsy, stroke and try to understand the underlying causes.”

The scanner was owned by the small-animal imaging facility at Nationwide Children’s Hospital in Columbus, but was used only a few times. Kashou, who had worked there as experimental research director, was able to transfer the scanner to Wright State’s facility at a substantially discounted rate. 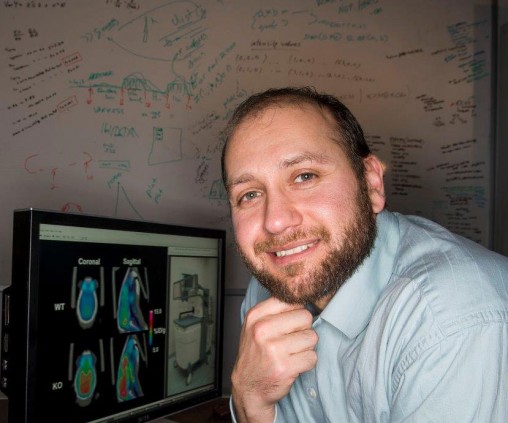 Nasser Kashou, who teaches advanced medical imaging, said the PET/CT scanner will be instrumental in training engineering students and could be used in a new neuroengineering program.

Kashou said the scanner will strengthen research proposals and increase their chances of securing funded. It will also create opportunities for Wright State researchers to collaborate with those at other universities and may give birth to new research ideas, he said.

Kashou, who teaches advanced medical imaging, said the scanner will also be instrumental in training engineering students and could be used as part of the curriculum in a new neuroengineering program for undergrads and grads.

“This will enhance our students as neuroscientists and engineers,” he said. “It will enable them to see exactly what a system looks like and get hands-on experience through experiments.”

He said the scanner could also spur development of new hardware and software and invention of other technologies.

Kashou’s personal research project involves pairing the scanner with optical light and using mathematical modeling to see the connection between the uptake of glucose and changes in blood concentrations.

“If I can correlate these two, then potentially in the future using ionizing radiation to study organ function would be unnecessary,” he said. “We can use light.”

“This puts us on the same level as big universities,” Kashou said. “It’s giving us recognition across the state of Ohio and hopefully the nation.”

The scanner will have its own space in a NEC Building laboratory, with very restricted access. Comprehensive safety procedures and safeguards will be followed to minimize radiation exposure.

Kashou credits Robert Fyffe, vice president for research and dean of the Graduate School; Nathan Klingbeil, dean of the College of Engineering and Computer Science; and Thomas Hangartner, chair of the Department of Biomedical, Industrial and Human Factors Engineering, for backing purchase of the scanner.

“They recognized the potential,” Kashou said. “It shows me how much support there is for young faculty, for innovation initiatives. It says a lot about Wright State — its potential and its future.”