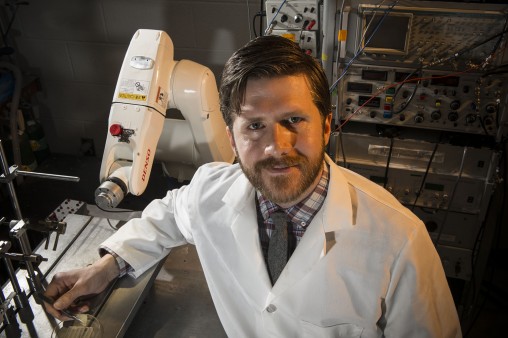 Student researchers like Adam Deardorff are excited to work in the Neuroscience Engineering Collaboration Building when it opens next month. A student in the M.D./Ph.D. program offered by the Boonshoft School of Medicine and the College of Science and Mathematics, Deardorff studies neural control of movement.

When it opens on Wright State University’s Dayton Campus next month, the Neuroscience Engineering Collaboration (NEC) Building will help some of the university’s brightest student researchers like Adam Deardorff and Emily Diller work together to create innovations that improve people’s lives.

“It’s not just new lab space, it’s not just a new building,” Diller said. “This is an opportunity for great minds to come together and make really big things happen. And we have to take advantage of that opportunity.”

Deardorff is an M.D./Ph.D. student studying neural control of movement.

They will be among the top graduate and undergraduate students at Wright State who will work in the NEC Building in a designated area called the bullpen — an open area on the third and fourth floors connected by an open stairway.

The dynamic space can accommodate up to 30 students who will be purposely mixed together to encourage connections — and collaborative research — between students of different disciplines, including neuroscience, engineering and psychology.

The bullpen will be filled with whiteboards, moveable desks and furniture and areas where students can interact both professionally and socially. 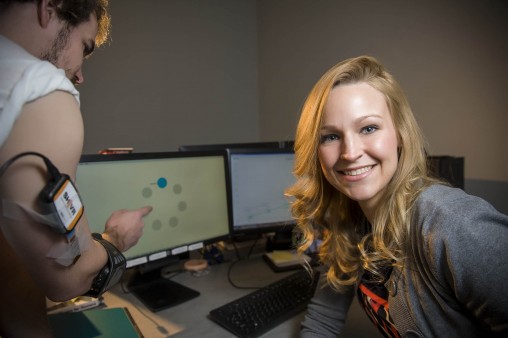 Timothy Cope, Ph.D., director of the Neuroscience Institute and chair and professor of neuroscience, cell biology and physiology, said the bullpen will play a key role in promoting collaboration between researchers.

“It will be the space that integrates the neuroscientists with the engineers. It will be where we bring interdisciplinary collaboration alive,” he said. “Collaboration is going to be made real by those students getting to know each other from different disciplines in that bullpen.”

Mixing students of different disciplines in the same space will encourage them to establish relationships so they can better work together, Wright State leaders say.

“When we get those students together, they will find and implement the bridges across these disciplines,” Cope said.

Deardorff said students are excited to move into the bullpen. “We love talking to each other and learning from each other. That’s why we’re here,” he said.

Wright State students have the freedom to pursue strong research ideas with support from faculty.

“Student ideas can contribute greatly to the direction of the research. The more opportunities we have to learn from and collaborate with one another, the better the ideas we bring to people like Dr. Cope,” Deardorff said.

While their research originates in different disciplines and colleges, Deardorff’s and Diller’s studies have much in common.

Diller is a graduate student and research assistant in the Ergonomics in Remote Environments Laboratory, which is directed by Caroline Cao, Ph.D., professor of biomedical, industrial and human factors engineering.

The vibrations are created by a device Diller built called a haptic actuator, which has similar technology to what is found in cellphones and speakers. She can control the vibrations through a computer program she wrote.

The haptic actuator is worn on the arm and when activated the sub-threshold vibration increases the signal-to-noise ratio in the nervous system, thus amplifying the original signal. The original signal comes from action potentials, which are propagated by neurons to communicate with other neurons and the brain by sending an electrical impulse.

In a study, Diller found that people’s accuracy and speed improved when they used stochastic resonance to complete a very difficult task.

Eventually, Diller wants to design a small device that can be implanted under the skin.

She said the technology could help people who have lost limbs or have neurological diseases and possibly help performance when faced with fatigue.

“If we can take this technology and apply it to work involving goal-directed movement, actually meaningful tasks, that’ll make a big difference,” she said. 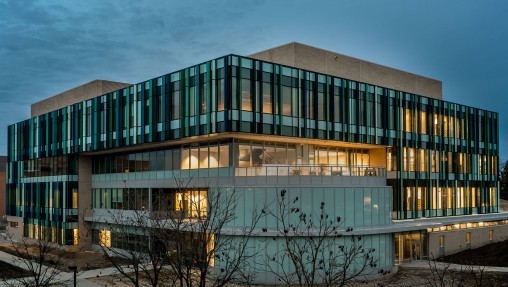 The Neuroscience Engineering Collaboration Building will feature an open area called the bullpen designed to encourage connections and collaborative research between students from different disciplines.

Deardorff said Diller and Cao’s research is relevant to his work and he’s excited to learn more about it when the NEC Building opens.

“If we can develop a mutual understanding of each other’s work, then we can collaborate more effectively. I think if we can combine principles of sensorimotor physiology and engineering to develop better experiments and better interventions, it will push our research to the next level. We have an opportunity to really make a difference in people’s lives,” said Deardorff, a student in the M.D./Ph.D. program offered by the Wright State Boonshoft School of Medicine and the College of Science and Mathematics.

He spent the first two years of the program in medical school and the last five years pursuing his Ph.D. He will return to medical school this summer for two more years.

He also has a master’s degree in anatomy from Wright State and received his bachelor’s degree in zoology and environmental science from Miami University.

“I’m just trying to learn as much as I can from them,” Deardorff said.

Deardorff’s research examines the neural basis for coordinated, purposeful movement. He examines motor neurons, which are cells in the spinal cord that fire electrical signals, known as action potentials, that cause muscles to contract and sensory neurons that send electrical signals to the brain and spinal cord about body and limb position.

The nervous system can vary the excitability of a cell, and the more excitable a cell is the easier it is for the cell to fire an action potential, he said.

Deardorff is studying why healthy motor neurons work while other nerves are dysfunctional and whether they can be repaired through drugs or surgery.

“We’re studying these pathways to understand not only how we move, but also what goes wrong in movement disorders,” he said.

His research may be able to help people who have nerve injuries in their legs, arms or spinal cord and chemotherapy patients experiencing dis-coordinated movements or an unstable gate.

Deardorff has published his research in the Journal of Physiology in 2013 and Frontiers in Neural Circuits in 2014 and has presented at the International Motoneuron Meeting in 2012 in Australia, where he received an award for best oral presentation by a student.