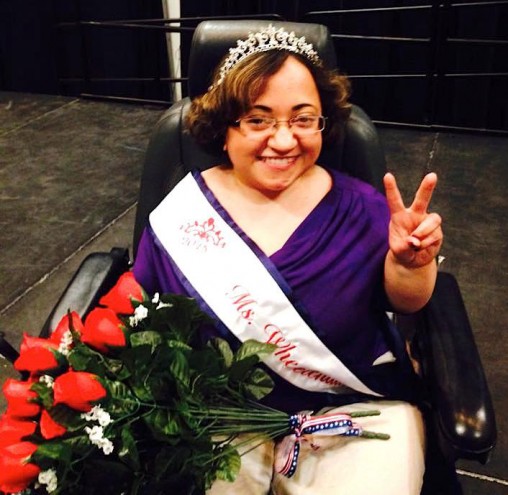 Wright State student Jasmine Spradley lives with Osteogenesis Imperfecta and shines in everything she puts her mind to.

That led to her to recently being crowned Ms. Wheelchair Ohio.

Unlike the majority of beauty pageants, Ms. Wheelchair Ohio seeks to find a woman who can represent and advocate for Ohioans with disabilities.

Spradley received her first wheelchair when she was in first grade.

When you use a wheelchair for a long time and for most of your mobility needs, it becomes a part of you,” she said. “I don’t think that people without wheelchair needs can understand that concept. In a way, the wheelchair becomes our legs or arms or body.”

Because of the challenges she has faced with having a disability, Spradley was seen as an influential advocate for others with similar challenges.

“I was surprised when they announced my name as the new Ms. Wheelchair Ohio. I wasn’t expecting to win and hadn’t thought about what to do if I did. I was excited, too,” said Spradley. “Ms. Wheelchair Ohio seeks to find charismatic and articulate women who can be an advocate for people with disabilities.”

She will continue on to compete in Ms. Wheelchair America in Des Moines, Iowa, against approximately 30 other women.

“I am excited that I get to travel for Ms. Wheelchair America and that I will meet many other influential women with disabilities whom I would never get the chance to meet had it not been for this competition,” she said.

Spradley is a psychology major who hopes to be a mental health therapist for families, married couples or college students.

Raised in Piqua, with her three brothers, she has lived life with the genetic condition, Osteogenesis Imperfecta, which produces fragile bones and a short stature. She relies on a powered wheelchair for mobility needs and avoid injury to avoid weakening her bones.

“My class is largely discussion based and she is one of the most vocal contributors to our topics,” said Andrew Hampton, a graduate teaching assistant in the College of Science and Mathematics. “She seems comfortable debating me and generally has interesting insights into character motivations and the application to social issues. She’s also demonstrated a willingness to volunteer help to other students.”

Spradley has been a member of two choir programs, the Psychology Club, Residential Life through the Community Council and Student Government and volunteers for on-campus events.

“My motto since coming to Wright State has been ‘Get Involved!’ I cannot stress it enough. If there is an activity, club or sport that you have a passion for, Wright State most likely has it,” Spradley said.

She plans on earning her master’s degree in counseling in two years.

Spradley is accepting funds for the Ms. Wheelchair America pageant at gofundme.com/mswheelchairohio.

For more information, email her at spradley.2@wright.edu.