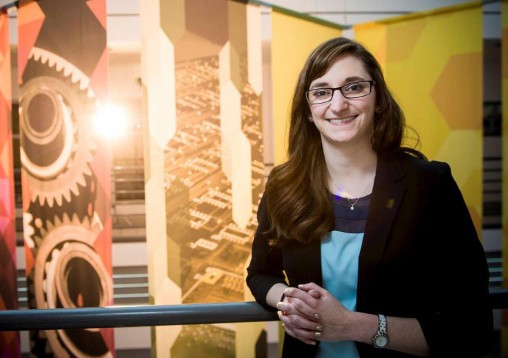 Growing up, it was hard not to be impressed. Her engineer father worked at Wright-Patterson Air Force Base on F-15s, F-16s and F-22s — spectacular jet fighters that roared, streaked and punched holes in the sky.

Burns grew up in Englewood and attended Northmont High School, where she was active in music, playing the clarinet. But it was at Northmont where she also discovered her passion for engineering.

“I’ve always liked math and solving problems; it was my strongest subject,” she said. “But I really got into engineering my senior year. I’ve grown up around it with my dad and have seen all the things that he’s done, the opportunities he had.”

Her father, who got his bachelor’s and master’s degrees in engineering from Wright State, spent a 35-year career at Wright-Patterson, working in human-factors engineering that brought him into close contact with fighter planes. Occasionally, his young daughter would visit him at his office.

Emily Burns, who is president of the Dean’s Student Advisory Board in the College of Engineering and Computer Science, hopes to get her master’s degree in aerospace engineering.

When she took a thermodynamics class and loved it, her father encouraged her to pursue propulsion. So when the internship at Wright-Patterson came along, she chose to work in the propulsion area.

“We do computer simulations; we run engine models to see if the engine operates at the right limits,” she said. “I’ve learned a lot already just being there since June. There is a lot that goes into all of the plane programs in general that you don’t even think about.”

An afterburning turbofan engine manufactured by Pratt & Whitney powers the F-15 Eagle and the F-16 Fighting Falcon. The engine in the F-22 Raptor is designed for supersonic flight without the use of afterburner and delivers more than 20 percent more thrust. The engine for the F-35 Lightning II is designed to significantly lower maintenance costs.

Burns, who is president of the Dean’s Student Advisory Board in the College of Engineering and Computer Science, hopes to get her master’s degree in aerospace engineering.

And after college, she has her career sights set on an oh-so-familiar place — Wright-Patterson’s program office for fighter jets.