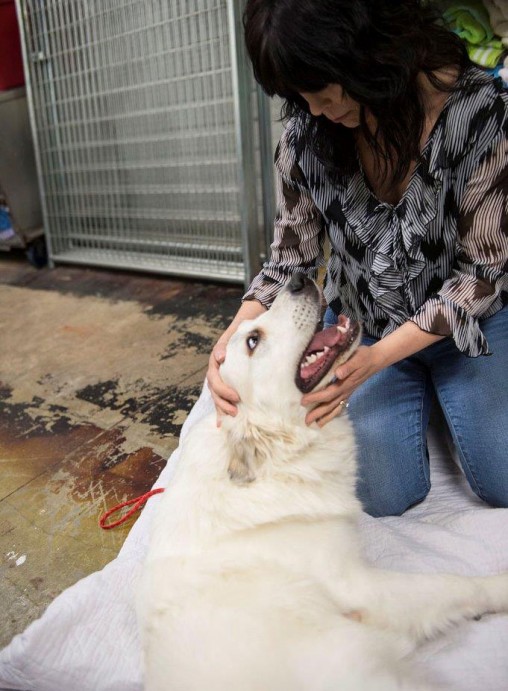 Wright State graduate student Regina Willen found that petting can reduce the stress of dogs in animal shelters. She is pictured with Roxy at the Montgomery County Animal Resource Center, where the research was conducted.

Dogs in animal shelters face high levels of health-threatening, behavior-altering stress that can keep them from being adopted and lead to them being euthanized. But petting the animals for as little as 15 minutes a day can change all that, according to Wright State University research.

The research was conducted by neuroscience master’s student Regina Willen under the direction of psychology professors Michael Hennessy, Ph.D., and Patricia Schiml, Ph.D.

“This research isn’t just improving lives, it’s saving lives,” said Mark Kumpf, director of the Montgomery County Animal Resource Center. “Fifteen minutes can save a dog’s life. It can make that animal a better candidate for a new home. And we have proven it scientifically.”

Hennessey began researching the effects of stress on shelter dogs 20 years ago. He and fellow researchers discovered that the levels of cortisol — the dogs’ stress hormone — were elevated when the animals were in a shelter.

“The stressors known to have the greatest effect on cortisol levels are exactly the kind dogs encounter in shelters. These include separation from social partners, uncertainty in the environment and exposure to novel places,” Hennessy said.

“This environment is very high stress for dogs,” added Willen. “It’s very loud; there are so many dogs barking.”

During the summers, undergraduate Wright State students have helped with the studies at the shelter to get research experience. Kumpf said the student researchers, clad in white lab coats, look like physicians making their rounds.

Willen, who grew up in Trenton, Ohio, got her bachelor’s degree in zoology from Miami University and is pursuing her master’s in neuroscience at Wright State. She has completed her research and is currently writing her thesis.

A dog lover her entire life, Willen has worked at many animal shelters over the years.

The Wright State studies indicated that the dogs’ stress levels would remain high for three days before gradually coming down.

Willen found that petting would reduce the dogs’ stress levels, but only temporarily. By the next day, the higher stress levels would return, requiring another petting session. 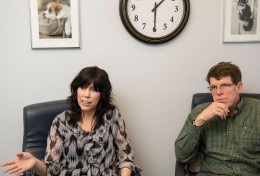 Regina Willen conducted the research under the direction of psychology professors Michael Hennessy and Patricia Schiml (not pictured).

But Willen also found that reducing petting sessions from 30 minutes a day to 15 reduced stress levels just as effectively. That finding could result in more dogs being petted or the need for fewer volunteers.

Petting sessions involve taking the dogs out of their kennels and bringing them to a quiet place.

“You pet them and love on them,” Willen said. “That’s all they need.”

“I hope that volunteers will see that if they pet the dog they are actually physiologically doing something for that dog,” Hennessey added.

Willen found that stray dogs respond better to the petting — with lowered cortisol levels — than do dogs that are surrendered to the shelter by their owners.

Willen also found a way to measure stress levels over the longer term by extracting cortisol from the dogs’ hair.

Twenty years ago, shelter officials were only able to find homes for about 25 percent of the dogs. Last year, it was 50 percent.

The research findings have led to changes in both veterinary procedures and behavioral management at the shelter. Dogs that are difficult to adopt are given three extra days in a behavioral modification program. In addition, Willen provides the dogs with toys, blankets and even classical music to reduce the stressfulness of the shelter environment.

Of the dogs that initially didn’t pass the criteria for adoption and were put through a second round of treatment, 75 percent ended up being adopted.

“Other shelters across the country are asking us how we’re doing this,” said Mick Sagester, shelter operations supervisor. “They are definitely looking at a lot of things Wright State is doing here. I call it cutting edge.”

“The difference now is we have the research to back up the anecdotal information,” he said. “We can prove scientifically that petting helps, that changing the environment helps.”

Kumpf said the goal is to get the dogs to that “sweet spot.”

“If they are going to continue to be stressed and have an adverse reaction to people, it makes it very difficult to get them adopted,” he said. “We get more dogs who 10 years ago would have been euthanized that are now being rehabilitated, worked with and able to go into a home.”