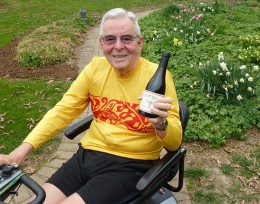 Diagnosed with amyotrophic lateral sclerosis (ALS), or Lou Gehrig’s disease, in 2003, Siervogel served as director of the Wright State Lifespan Health Research Center and its predecessor, the Division of Biology, from 1993 until he retired in July 2013. He held faculty appointments in both pediatrics and community health as well as having the honorary title of Fels Professor during his tenure.

Siervogel received many honors in his 36 years with the university. In 2002, he was selected for the Wright State University Presidential Award for Faculty Excellence in Research.

In 2006, the Wright State Board of Trustees awarded him the title of Brage Golding Distinguished Professor of Research for having produced a significant body of work that brought distinction to the university and international recognition to his research.

He earned his Ph.D. in genetics at the University of Oregon in 1971 and conducted postdoctoral research in human genetics at the University of North Carolina, Chapel Hill, from 1971-73. He was enticed to leave a visiting professorship in genetic epidemiology at UNC by Alex Roche, M.D., Ph.D., then director of the Fels Research Institute, in Yellow Springs. The private, nonprofit Fels Institute was home to the Fels Longitudinal Study, the longest-running longitudinal study of human growth and development in the world.

“Alex Roche had the vision to see the potential for genetics to play a role in the Fels study, so I was brought onboard in 1974 to add a new dimension,” Siervogel was quoted as saying in a profile published by the university in 2006. “Roche was an instrumental moving force in terms of getting the Fels study on the right track, getting research funding for it, and setting the direction that we have followed since he retired from WSU in 1994.”

According to his wife, Renee Harber-Siervogel of Yellow Springs, following his diagnosis, Siervogel became very active as an ALS advocate at the local and national level. He participated in several ALS studies, was an ALS patient educator and helped organize Team Shiraz to participate in the Dayton ALS Walk to be held in Fairborn on Sept. 13.

In a profile published in the Dayton Daily News in 2012, he called ALS the “wildest roller coaster ride you can ever imagine.” He told the reporter that he tried to stay positive. Last summer, his wife posted a YouTube video of him participating in the ALS Ice Bucket Challenge.

In the 2006 university publication, he said, “Once you get past the initial shock (of learning you have ALS), you decide whether you are going to make the most of the rest of your life, and that is what I am doing. It’s not for me to lament what might have been, but to enjoy what I have today.”

In addition to his wife, he is survived by a son, Jeffrey A. Siervogel, and a daughter, Wendy S. Siervogel, three granddaughters and many other friends and relatives. His family plans several celebrations of his life in different locations with plans to be announced at a later date.