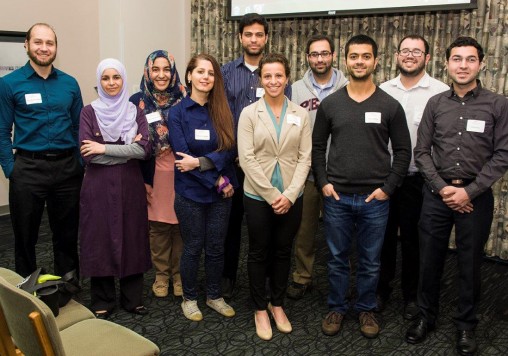 The student appeared to be in a bit of a fog as he wandered the hallway in Wright State University’s Russ Engineering Center just outside the office of assistant engineering professor Nasser Kashou, Ph.D.

So Kashou invited him in to talk. He learned that while the student had a notion about going to medical school, he wasn’t really sure what he wanted to do with his life. So Kashou decided to do a little steering.

Shortly after he walked out of Kashou’s office, the student changed his major to biomedical engineering and would spend the next three years conducting research in Kashou’s imaging lab.

Other members of the lab have similar stories. One student said Kashou was instrumental in him pursuing his master’s degree.

Kashou has turned the lab into a petri dish that grows student research stars. In the past three years, 30 students of 11 different nationalities have gone through the lab, nearly half of them undergrads.

The students in the lab have come to dominate Celebration of Research, a university-wide showcase of research projects. For the past two years, Kashou’s students publicly presenting their projects required a full session and room of their own.

Kashou has created an environment that not only gives students research experience, but teaches them how to present their research in an interesting and understandable way.

The students practice their presentations among themselves during weekly group meetings.

“When I came here, I was not a very good programmer,” said Mohd Usmani, of India. “I was able to improve my skills in programming, my presentation skills and my speaking skills.”

The students must demonstrate the significance of their research, do data analysis and write reports.

One student is working with Miami Valley Hospital using video cameras to assist in robotic surgery. Another student is trying to quantify the ventricular volume in the hearts of mice to minimize and optimize the acquisition time for particular magnetic resonance imaging (MRI) protocols.

Angelica Zampini, of Cleveland, is doing research in neuroimaging — diffusion tensor imaging — to find new ways to detect and quantify diseases. The research has led to her publishing a paper in the journal PLOS ONE, presenting her work at national conferences in San Antonio and Orlando and getting a job after graduation at Ten Vison Ultrasound.

Christopher Meier, of Greenville, is working on noncontact imaging solutions to help in security, human factors and work-flow analysis; Zohreh Tavakkoli, of Iran, is developing a computer-assisted tool to model the abdomen.

Some of the students come up with their own research ideas. Other ideas are suggested by Kashou.

“I want to give them something they’re interested in,” he said. “I have lots of data, and I have close ties and collaborations with clinical institutions.”

Kashou came to Wright State from Children’s Hospital in Columbus, where he was the experimental research director in radiology. He enjoys the mentoring aspect of his work at Wright State.

“I want to take whatever I know and pass it down,” he said.

Diogo Diaz, of Brazil, is working on developing a wireless system to evaluate the oxygenation of tissues such as the brain and muscles that can be used outside on stroke victims. The lab has enabled him to meet other researchers around the world who are doing similar work.

Same for Ali Kadhim, of Cleveland, who is using MRIs to look at hydrocephalous in pediatric patients.

“It’s definitely gotten my name out there,” he said.

Chirag Limbachia is working on functional MRI in collaboration with The Ohio State University; Irfaan Dar has published a manuscript and is working with Nationwide Children’s Hospital using functional near infrared spectroscopy in the NICU.

Mohammad Maddah is using Kinect 3-D technology in order to develop computer-aided tools to assist in robotic surgeries; Amena Shermadou is working with neuroscientists to automate the processing of cell images for better and more accurate quantification and visualization.

“Part of my responsibility as a professor and researcher is to give back and provide our students with a valuable experience that can shape their future careers,” said Kashou. “I do this because I simply love it.”