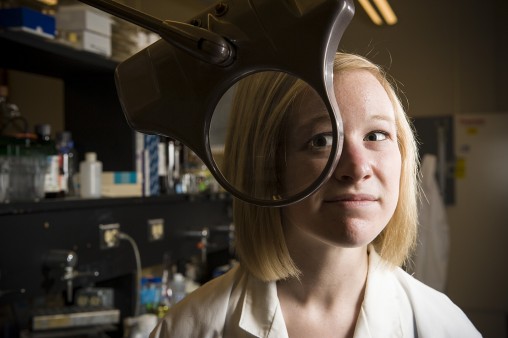 After graduating from Wright State in May with a degree in biological sciences, Elizabeth Harris will study at the Southern College of Optometry in Tennessee this fall. (Photos by Erin Pence)

There is more that meets the eye with Wright State graduate Elizabeth Harris, who will mainly see blue, green, hazel and brown in her future career in optometry.

Most people do not reap much from failing a portion of their driver’s license test, but Harris found her career path after being told she had to visit the eye doctor before getting her license. That was the beginning of her fascination with learning how contacts and glasses help the eyes.

“I didn’t think about this (career path) until I started to wear contacts, and glasses and contacts became very intriguing to me,” said Harris, who graduated in May.

She will continue her education at the Southern College of Optometry in Tennessee this fall.

Born in Iowa, Harris grew up wanting to be an artist or teacher. Her family later moved to Lebanon, Ohio, when Harris was in fourth grade.

In high school, she had a good biology teacher who piqued her interest in biology.

With the combination of a good teacher and a failed eye exam, Harris pursued her new interest in an undergraduate degree in biological sciences at Wright State to better understand how the body works specifically with the eyes and brain.

She likes how complex the eyes are. “It’s such an essential sense,” Harris said.

Both of Harris’ parents are Wright State alumni and her two siblings also attend the university.

At Wright State, Harris was able to work in a research lab and intensely study the biology of how the eyes work on a microscopic level.

“Wright State has a lot of great opportunities, she said. “It’s small enough where you don’t feel like just another number without it being too small.”

She was involved in many activities in the Wright State community, including intramural soccer, the Campus Crusade for Christ ministry, Premed Society and Biology Club. She also plays the guitar and piano.

Harris is interested in vision therapy, helping individuals by training their brain and eyes to work together. “The light filters through the eyes, but it’s the brain that really sees,” she said. 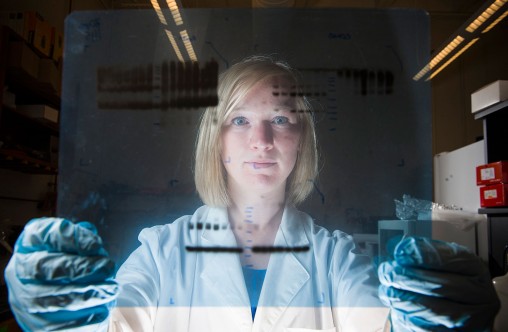 Elizabeth Harris worked in a research lab at Wright State, studying the biology of how the eyes work on a microscopic level. She is pictured holding a X-ray of an eye.

She explained the process of vision with the brain and eyes.

“It basically involves light passing through your eyes through the pupil where it strikes the retina and activates the rod and cone cells that enable vision. They then pass the signal through the optic nerve, which sends the signal to the visual cortex in the brain that translates the image,” she said.

Harris currently works at the Village Eyecare in Lebanon, Ohio, working the front desk, selling and fitting glasses, filling out insurance, pretesting patients for a doctor appointment and taking retinal images or pictures of the back of the eye. She tests patients’ visions by using the acuities test, or having the patient read lines of letters.

As an optometrist, she will work with patients who have lazy eye, traumatic injuries and diseases affecting the eyes.

“Disease can lead to the degeneration of the rod and cone cells in the retina, which can lead to blindness, but also if there is a problem in the brain with signaling there could be a blindness from that. Color blindness is a genetic issue, usually occurring in males,” Harris said.

Lazy eye, or amblyopia, occurs when vision does not properly develop in one eye. It could be caused by one eye focusing better than the other eye, which then causes the signals to be distorted and the brain eventually ignores the signals from the specific eye. It could also be the cause of a misalignment in the eyes.

Lighter-colored eyes are more at risk for specific diseases like macular degeneration.

“The retina or back of the eye is a big indicator of whether someone has an eye disease that could be destroying their vision. Some tumors are even able to be detected through the optomap that allows a picture of the retina,” said Harris.

When fitting glasses she must consider the person’s face shape and size of their head and nose. She can adjust the fitting and tightness on the ears, but the glasses cannot be too wide or poorly fit across the bridge of the nose.

Harris has an even bigger passion investing in the well-being of her patients, only starting with the eyes.

“I’m looking forward to making relationships with my patients … like doing overseas mission trips with eye care,” Harris said. “I like when a kid comes in and gets new glasses and says ‘Mommy, I can see now.’ I’m excited because it can be a big thing to people.”