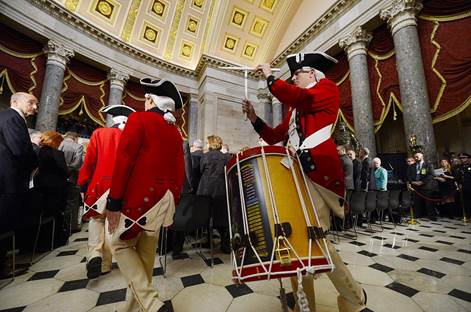 Wright State’s Jeff Brooks plays for dignitaries as a member of the United States Army Old Guard Fife and Drum Corps. He is pictured at the dedication of the bust of Winston Churchill in the U.S. Capitol Building.

As he stood on the White House lawn with the United States Army Old Guard Fife and Drum Corps preparing to perform for President Obama and Japanese Prime Minister Shinzo Abe, Jeff Brooks took a deep look inside himself and reflected on his journey.

The drummer, who sharpened his musical skills at Wright State University, thought about all of the practicing, all of the classes and all of the help he had gotten from teachers and family along the way.

“I remember the moment vividly because I am not normally one to get nervous, but as we marched I couldn’t help but feel the enormousness of the event and just where I was,” Brooks said.

The April presidential event wasn’t the staff sergeant’s first brush with history and fame. He recently performed for the family of Winston Churchill during a ceremony to dedicate a bust of Churchill in Statuary Hall of the U.S. Capitol. He also performed at the Kennedy Center to honor Tom Hanks, Al Green, Lily Tomlin and others as President Obama and First Lady Michelle Obama looked on.

Brooks has indeed come a long way from his days of growing up in Centerville. His father is a retired band director and his mother a schoolteacher at Cline Elementary.

“I was interested in drumming for as long as I can remember,” he said. “My dad is a great drummer himself, and he would gig constantly when I was young.”

Brooks began playing the drums when he was 6 or 7. He took lessons from Ray Weiner at Hauer Music and Jane Varella, longtime percussionist of the Dayton Philharmonic Orchestra.

“This was essential because they held me accountable in a way that a family member couldn’t,” he said. “Most importantly, I learned to read music.”

Brooks’ father played drums in musicals at Wright State and at the Victoria and Loft theaters downtown Dayton as well as in countless concerts and other events.

“I attended almost all of them and would help my dad carry and load/unload the drums and other equipment as a roadie of sorts,” Brooks said. “I have vivid memories of sitting up in the lights above the balcony watching shows in the theater at Wright State while my dad played.” 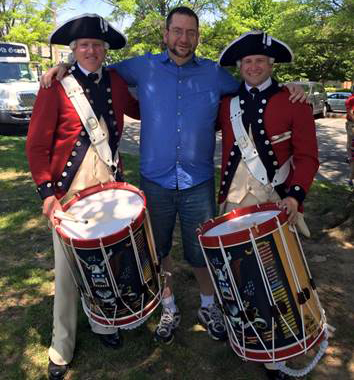 By the time Brooks arrived at Centerville High School, he was “completely immersed in drumming and that pretty much dominated my life.”

Brooks became a member of the award-winning Centerville marching band and indoor drumline. Of major influence were Wayne Markworth, band director, and Tim Fairbanks, drumline instructor. Of the seven drummers who made the snare line in 2000, Brooks and three others currently work professionally in the music industry.

“That’s a great indication of the kind of instruction we were getting,” he said.

“I had heard about his prowess as both a player and an educator, and I wanted to capitalize on his knowledge and experience in the music industry,” Brooks said.

At Wright State, Brooks took composition and music history classes, performed in the wind and percussion ensembles and took part in recital performances.

In the summer of 2012, Brooks auditioned for the United States Army Old Guard Fife and Drum Corps.

“I was invited to the final, live round of that audition, but I was not offered the position. I was devastated,” he recalled. “But I returned home and worked diligently on my style and sound.”

He said the traditions of Wright State, which embodies the Wright brothers’ spirit of perseverance, gave him strength.

“When I was preparing for my audition, I often would reflect on their trials and tribulations en route to success to help me keep things in perspective if things got hard,” he said.

Brooks auditioned again in February 2013 and won the job. He joined the Army and left for basic training.

The Corps is one of four “Special Bands” in the Army. It is a permanent duty assignment, and members can spend their entire military careers with that unit.

Part of the 3rd U.S. Infantry Regiment and stationed at Fort Myer, Virginia, the Corps is the official ceremonial unit and escort of the president.

Those in the 69-member unit play fifes, handmade rope-tensioned drums and single-valve bugles. They perform in uniforms patterned after those worn by the musicians of Gen. George Washington’s Continental Army.

The Corps performs at all armed-forces arrival ceremonies for visiting dignitaries and heads of state at the White House. It has also participated in every presidential inaugural parade since President John F. Kennedy’s in 1961.

Some ceremonies can involve long periods of standing at attention. Corps members must complete standing-at-attention tests of up to 75 minutes during their ceremonial training.

The Corps averages about 500 performances annually. It has entertained millions of people in major parades, pageants, historical celebrations and sporting events, including the Super Bowl, Kentucky Derby and Indianapolis 500.

Brooks’ passion for the drum keeps him marching to the beat.

During a recent visit to the National Museum of the American Indian, he came across an ideology that rings true to him — “the drum is the heartbeat of the Earth.”

“Everything in the world is rhythmic, whether your realize it or not,” Brooks said. “Playing drums means the pursuit of mastery of time and space, and that’s a noble pursuit.”