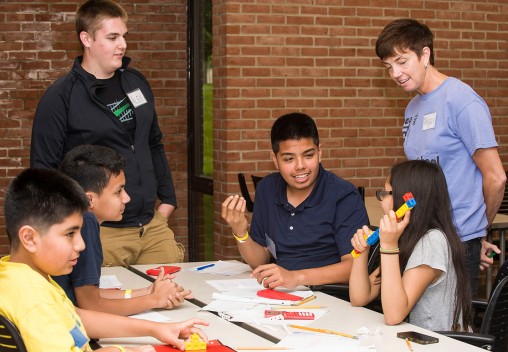 About 25 students are attending the Math Boot Camp at Wright State this month to better their science, technology, engineering, mathematics and medicine skills. (Photos by Erin Pence)

Middle and high school students have come to Wright State to better their STEMM (science, technology, engineering, mathematics and medicine) skills at the Math Boot Camp.

Now in its second year, the free camp is hosted and sponsored by the College of Science and Mathematics and the Office of Latino Affairs. It is held July 6-17.

The camp reaches out to local at-risk youth and minority students, specifically young Latinos, to help improve their STEMM scores and abilities. The camp accepts students in sixth through ninth grade and with most affiliated with El Puente Learning Center, Saint Mary’s Catholic Church and other local community locations.

STEMM education is valuable for increasing the students’ confidence in education and employment.

“I feel more confident,” said Bryon Perez-Avila, 11. He hopes to “be more smarter and learn new things” by the end of the camp. 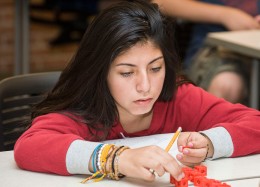 Sponsored by the College of Science and Mathematics and the Office of Latino Affairs, the math camp reaches out to local at-risk youth and minority students.

Perez-Avila would like to be an inventor when he is older.

“The jobs now aren’t going to exist 10 to 20 years from now,” said Tony Ortiz, associate vice president of Latino affairs and senior lecturer. The camp “helps with problem solving. There’s a lot of employment in the area and unemployed people because they don’t have the skillset to fulfill them,” said Ortiz.

Teachers and volunteers include Wright-Patterson Air Force Base personnel working in STEMM fields, Wright State professors and students, TAFSS (The Academy for STEM and Sports) teachers and Peggy Kelly, director of the Math Boot Camp and math lecturer at Wright State.

“If they know it already, then it’s digging deeper into the concept … or it may introduce them to a new concept,” said Kelly. “We don’t want math to be a stopper for them.”

Liberty Endres, 13, hopes to “excel in math this (school) year” after attending the Math Boot Camp.

The camp “really helps. I made friends and also learned a lot not just in math but other things,” said Endres. The teachers “have a big variety in the way they teach the math in creative ways to help us learn.”

Endres wants to be an anesthesiologist and attend Columbia University in New York City.

“Wright State plans to continue to offer the Math Boot Camp in the future. Our long-term goal would be to have the program funded through grants,” said Kathryn “Katie” Brown, staff coordinator in the Office of Latino Affairs. “This way we could take more kids and really make it something special.”

The camp will follow up with the students through the following academic year by evaluating grade changes from the previous year, with student permission.

“There’s definitely three to four students where you could see their interest. They’re already positioning themselves to go into a STEMM field. … Others may not know what career to go into yet, we are trying to introduce them to it,” said guest speaker Edgardo Santiago, TAFSS vice president for programs.