Wright State Way pedestrian bridge set to open over I-675 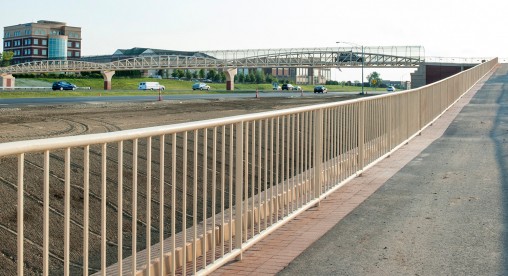 Beavercreek, Fairborn, Wright State and Clark State Community College will celebrate the opening of the Wright State Way bridge with a ribbon-cutting ceremony on Aug. 28. (Photos by Erin Pence)

Wright State University students, faculty and staff will have a safer alternative route to nearby restaurants and shops when a new pedestrian and bicycle bridge opens over Interstate 675.

The Cities of Fairborn and Beavercreek, Wright State and Clark State Community College will celebrate the opening of the Wright State Way bridge with a ribbon-cutting ceremony on Friday, Aug. 28, at 2 p.m.

Attendees should gather on the Beavercreek side of the bridge, behind Sam’s Club, 3446 Pentagon Blvd.

The 467-foot long, 12-foot wide steel-beamed bridge will connect Center Park Boulevard in Fairborn with the intersection of Pentagon and Commons boulevards in Beavercreek.

The bridge, which will be lighted, starts on the Fairborn side at the Wright Executive Center office plaza — across from the Wright State campus — and connects to a bike and pedestrian path near Sam’s Club.

The ramp leading to the bridge is compliant with the Americans with Disabilities Act.

“Wright State Way will give our student population greater access to restaurants, shopping and entertainment, while also creating a convenient corridor to and from the Wright State campus for the Beavercreek and Fairborn communities,” said Wright State President David R. Hopkins.

The bridge will make it safer and easier for pedestrians and cyclists to travel to and from Wright State and the Mall at Fairfield Commons and the surrounding area, which includes Soin Medical Center and a Clark State classroom building.

Before the construction of Wright State Way, pedestrians had to cross 675 over the bridge on North Fairfield Road, which does not have a sidewalk.

“Prior to the construction of the pedestrian bridge, our students using wheelchairs and other mobility devices were limited in their options for an accessible and safe route to get to the Mall at Fairfield Commons and surrounding businesses,” Webb said. “The bridge will offer an additional free and green option for students who wish to travel safely and independently from campus to the mall area.”

The bridge will also help area businesses gain new customers who now have more convenient access to their goods and services, Webb said.

“I am also hopeful the bridge will open access to more employment opportunities to Wright State students with disabilities and limited transportation options,” he said.

Ryan Rushing, a political science major at Wright State who serves as the chair of Beavercreek’s Board of Zoning Appeals, said over time Wright State Way will become a landmark remembered by generations of students.