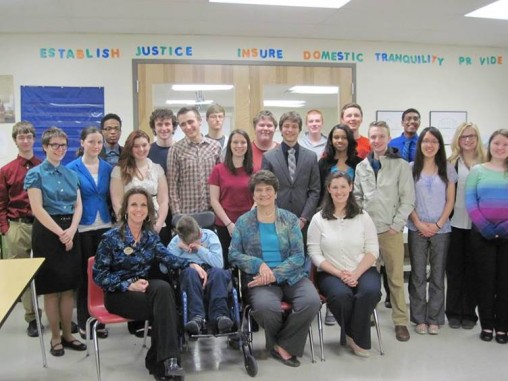 Concerned about the needs of people with disabilities, a passionate group of high school students at the Dayton Regional STEM School has become a moving force behind state legislation to require public family restrooms with adult changing stations.

The project is part of a government class and was born after students learned that Jennifer Helton, a former intervention specialist at the school, has a teen-aged son who is severely disabled and uses a wheelchair and cannot use a restroom on his own.

Helton is limited in the places she can take her son because there are few restrooms with adult changing stations, forcing her to change him on the floor of the family van, which lacks privacy and can be affected by bad weather.

“As we learned more and more about the issues Ohioans with disabilities face when it comes to accessibility to restrooms, we realized that it is a much bigger problem than this one instance,” said Alex T. Smith, a student from Dayton. “So we recognized that there is this need that isn’t being accommodated for people in our society.”

Ohio Senate Bill 112 would require public facilities built after Jan. 1, 2017 — including movie theaters, shopping malls and museums — to have family restrooms that include adult changing stations. There are currently very few. The students are working to get the bill passed by a Senate subcommittee and to get a companion bill introduced in the House.

The students plan a Call to Action rally at the school at 6 p.m. on Tuesday, Sept. 1, to bring attention to the campaign and try to create more public pressure for passage of the legislation. State Sen. Peggy Lehner, primary sponsor of the bill, will be the keynote speaker.

“At the rally, we will be looking for people willing to commit to an action plan so that it gets a lot of momentum,” said government teacher Meghan Durkee, adding that she would love to see Wright State students get involved in the campaign.

Wright State University is a founding partner of the STEM (science, technology, engineering and math) school and the lead higher-education partner. The Kettering school opened in 2009 and in June 2013 graduated its first class.

It is one of 12 public STEM schools across Ohio. The schools are designed to offer students a relevant, real-world education that prepares them for college and the working world. The students participate in inquiry and project-based instruction that marries traditional STEM content with social studies, language arts, fine arts and wellness and fitness.

“The stuff the students do is amazing,” said Arch Grieve, the school’s community outreach director. “Project-based learning is unique.”

Each student at the STEM school is required to do an internship and two job-shadowing experiences with a local business or organization.

“The STEM school is important because it prepares students for jobs we want to keep in the Dayton region, especially in the STEM fields,” said Grieve. “Enhancing the human capital of the region is part of the mission.”

The students’ government project was launched in last year’s government classes and is continuing this year. The students have learned about the legislative process and how to lobby for legislation.

They wrote letters and made calls to lawmakers and their representatives and rounded up support from organizations. They also made a logo and posters as well as created a website, a Facebook page and a Twitter account to report developments and publicize the campaign.

“They’ve basically learned how to lobby,” said Grieve, who got his bachelor’s degree from Wright State in social science education and his master’s in international and comparative politics. “They’re learning now how difficult it is to get legislation passed.”

Adam Robinson, a student from Fairborn, said the lobbying campaign taught him to push himself and become more assertive in talking to people on the phone.

Bethany Wilson, a student from Huber Heights, said the most important part of the project is mastering advocacy.

Durkee said the students brainstormed a campaign strategy and each added their own individual skills, talents and personalities to the campaign. For example, some are good at photography, others at videography and others at using their persuasive power over the telephone.

“One of my goals as a teacher, especially in social studies, is making sure students realize they can make a difference,” Durkee said. “And I don’t think a single student leaves this project not being convinced of that. So regardless of what they remember about government, branches of government, how a bill becomes a law, the fact that they all feel empowered to make change in whatever they’re passionate about is the biggest takeaway from this project.”

Smith said the project has made him a more aware and active citizen.

“It’s made me much more in tune with why the political process is important and how we can be a part of it to make things better and make society more equal for all people,” he said.