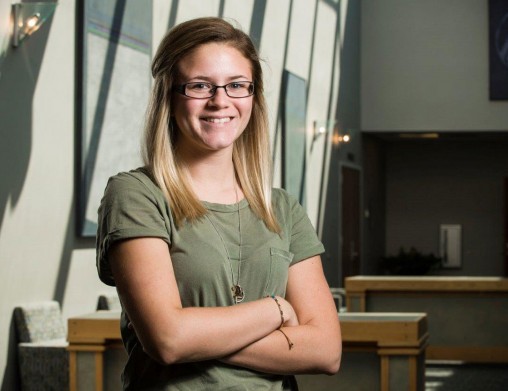 Education major Bailey Sturgeon was a valedictorian at Xenia High School and selected Wright State because of the university’s full scholarship for high school valedictorians and salutations. (Photos by Erin Pence)

The number of high school valedictorians and salutatorians choosing to attend Wright State University has skyrocketed, with twice as many enrolling this fall as did just two years ago.

“It increases the number of high-achieving students on campus, balances the profile of students and gives more of our average college students a good example of what it means to be highly successful,” said Mary Ellen Ashley, vice president of enrollment management. “And the faculty love a mix of students, as it keep them energized. Good students tend to help the faculty ‘lift all boats.’”

There are also 447 new honors students on Wright State’s campus, 100 more than there were last year and bringing the total to 1,200.

“High-achieving students are great tutors, paraprofessionals and leaders while on campus,” said Ashley. “They tend to graduate on time, get good jobs, may become active alumni, can easily become graduate students and do great research, thus spreading the good word about Wright State.”

Bailey Sturgeon was a valedictorian at Xenia High School, where she was a cheerleader and member of the Hip Hop Dance Team.

“I just stay motivated,” Sturgeon said. “I’m really good at self-motivating myself to do the best that I can. And I took hard classes because I knew if I did it would reward me in some way, and it has.”

Sturgeon, an education major, had planned to attend the University of Cincinnati but changed her mind and came to Wright State.

“A big part of it was the free tuition,” she said. “I had no idea that Wright State even offered that.” 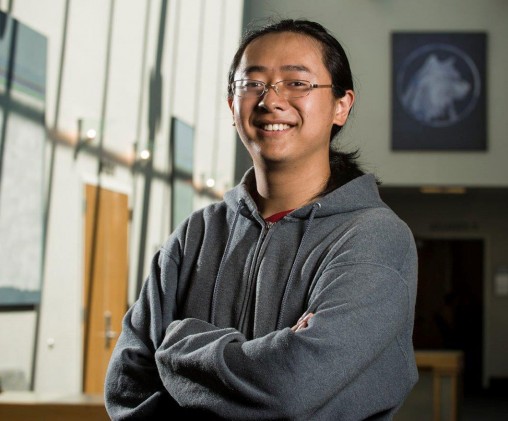 Ryan Ly was a salutatorian at Middletown High School.

Ryan Ly was a salutatorian at Middletown High School, where he co-founded the philosophy club. His formula for academic success is to pay attention in class and meet your deadlines.

Ly decided to attend Wright State because of the scholarship money and because he can get a master’s degree in electrical engineering in five years.

The surge of valedictorian and salutatorian enrollments at Wright State followed a campaign by the Division of Enrollment Management that involved mailings to all high school superintendents, principals and guidance offices in Ohio. The mailings — titled “2 Ways for Your Top 2 Students to Earn a Free Degree” — included two removable credit card-like attachments that congratulated the valedictorians and salutatorians and told them how to get the scholarships.

One principal told Ashley that the mailings had resulted in many valedictorians and salutations in this region deciding to attend Wright State, even some who were originally headed to prestigious East Coast universities.

While they are on the road recruiting, Ashley and her staff contact high-achieving prospects and later renew those contacts with students who apply or show interest in Wright State.

“There is so much here at Wright State that everyone should know about,” said Ashley. “Getting the word out and going after the students we want more aggressively is good marketing strategy, and we are getting into that more and more.”