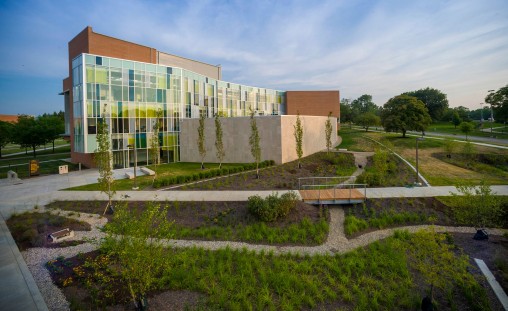 The rain garden alongside the new Student Success Center combines environmental form and function. (Photos by Will Jones)

Strolling along a wooden bridge outside the new Student Success Center on Wright State University’s campus, one cannot help but admire the rolling sea of plants below. On a sunny day, “streams” of gravel crisscross underneath, bordered by fluffy green grasses, river birch trees and native flowers.

But when it rains, the expanse is transformed as storm water diverted from the building’s roof and surrounding hardscape fills the depressions, creating ribbons of motion. Working like a sponge, the unique soil and plantings filter out contaminants and allow much of the water to slowly percolate back into the ground prior to being released off-site.

The rain garden was designed as part of the construction of the new 67,000-square-foot Student Success Center, which the university will formally dedicate on Friday, Oct. 9, at 1 p.m.

The energy-efficient building is anticipating a LEED certified designation by the U.S. Green Building Council.

Environmental impact was considered throughout the project. For example, the bridge surface is made of a native black locust wood, in lieu of an exotic hardwood. 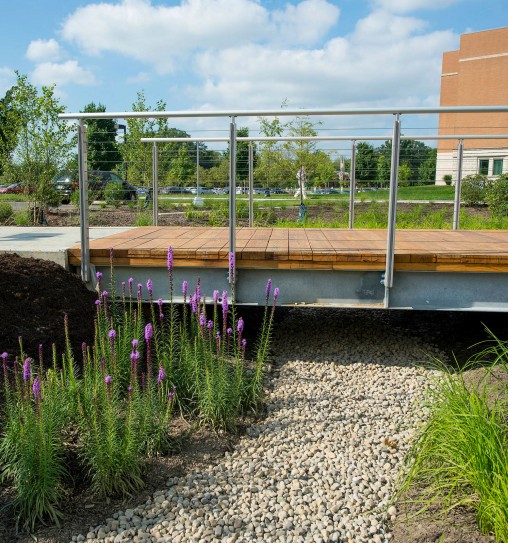 The landscape architects carefully chose plants to accommodate the varying levels of water inundation, as well as to provide year-round visual interest. Plants such as sedges, which thrive in wet soils, are located in the lower portions of the basin, while plants that tolerate both medium-wet soils as well as dry conditions, are placed along the banks of the basin.

The rest of the basin is populated with pockets of plantings that vary in size, texture and seasonal bloom time. In the spring, Virginia bluebells and blue flag iris flaunt their rich hues. Later on, marsh blazing star and black-eyed susan punctuate the landscape with spots of color.

Columnar Armstrong maple trees tower over the rain garden, casting shade for the benefit of users and nesting habitat for a variety of native bird species. Plants such as swamp milkweed provide nectar and habitat for butterflies, such as the endangered Monarch. 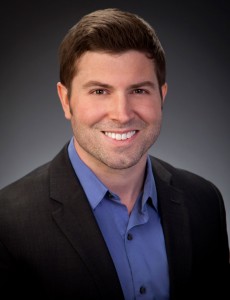 “One of the main goals for the rain garden design was to create a clean transition between the manicured campus lawn and the naturalized aesthetic of the rain garden plant material,” Skinner said. “This transition is defined by a flush curb that follows the form of the building as well as a monoculture of native grasses.”

EDGE previously provided site design and landscape architecture to the Rinzler Athletic Complex at Wright State. The project included renovations to the existing soccer stadium and practice fields and an iconic pavilion and plaza that provide gathering areas and spectator viewing.