AHEAD of the pack 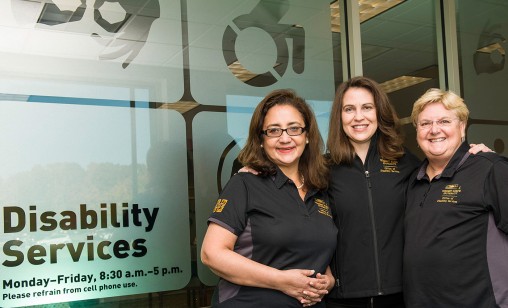 From left: Erendira Lopez-Garcia, Heather Rando and Jean Denney of the Office of Disability Services will lead breakout sessions during the AHEAD (Association on Higher Education and Disability) Conference at Wright State on Oct. 23. (Photo by Erin Pence)

For those familiar with Wright State’s rich leading-edge history of supporting students with disabilities, it may come as a shock that the university has never hosted the Ohio AHEAD (Association on Higher Education and Disability) Conference.

Having hosted the first national conference of its kind and then a few more in its early years of the national association, the university is making preparations to host disability service providers from universities and colleges across the state on Friday, Oct. 23, in the Student Union.

The conference is expected to draw as many as 120 disability services professionals from public and private institutions, both four-year and two-year schools, to a university that’s been a leader in the industry since the ’70s, some 20 years before the Americans with Disabilities Act (ADA) of 1990.

“We really made a push to say, ‘it’s the 25th anniversary of the ADA, if there’s a time for us to highlight Wright State and what we do here, this should be the year.’ And we got the nod,” said Tom Webb, director of disability services.

At its core, the ADA was created to open doors and provide opportunity to those who have traditionally been shut out from employment, education and participation in everyday activities like shopping, visiting a park or even riding a bus. In many ways it validated what Wright State had been doing for two decades prior: working to provide equal access to higher education for students with disabilities.

Today, Wright State is a national leader in everything the Americans with Disabilities Act stands for.

Wright State has one of the most accessible campuses in the country. Named among the top five disability-friendly universities in America, Wright State provides an accessible pedestrian tunnel system that connects nearly every building in the academic sector of campus. The university converts countless textbooks into alternate formats for students with disabilities, helps coordinate in-house personal assistance services (something most universities have stopped), and can boast about having a robust Ohio STEM Ability Alliance (OSAA) program, a one-of-a-kind service dog park, the reigning Ms. Wheelchair Ohio three years running and a popular service dog training program.

“We’ve done such a good job of providing basic accommodations, which lets me focus on extra programming for students like with the OSAA. We do a lot of intensive developmental advising for students that a lot of schools don’t have the time or resources for, but it is key for student success,” said Jennifer Barga, disability and STEM support specialist.

Wright State has shown that it retains its students with disabilities and graduates them at greater rates than the national and statewide rates. Barga said it’s all about the extra layers of support at Wright State that you don’t see elsewhere.

“That’s so important for ADHD and learning disability students. It’s also a big factor in how we are learning how to serve one of our fastest growing populations, students on the autism spectrum,” said Barga.

RASE pairs students with a transition coach who meets with them for up to 10 hours a week. Usually a peer as well as a student, the coach helps model appropriate social interaction.

Typically college students on the autism spectrum are highly intelligent and very successful in the classroom but can struggle with social interaction and social cues like knowing when it’s appropriate to talk or wait their turn.

“They role-play, they talk through situations with them on how they can handle things in the classroom and outside of it,” said Webb. “It’s often simple stuff, like how to meet with your professor before the semester to let them know about your disability.”

A recent peer-reviewed research article based on the results of Wright State’s RASE program shows significant positive outcomes for retention and GPA with these students.

“You are not going to find, to my knowledge anywhere in Ohio, an additional layer of support for our students on the autism spectrum like we are offering with RASE,” said Webb.

Jean Denney, assistant director of physical support in ODS, and Dan Darkow will also lead a breakout session. Now in a professional student support services role at Miami University, Darkow, a Wright State graduate is applying the lessons he’s learned and benefited from to students in Oxford, Ohio. He and Denney will lead a breakout session about the value of the Personal Assistance Station and Personal Assistance Service model at Wright State. Webb said no other Ohio university offers this critical service and fewer than 30 universities offer it nation-wide.

“The PA station here at Wright State is unlike any other college. They always have someone available during the day for us. Having that flexibility and not being tied to a certain schedule is priceless,” said Darkow ’15, who was born with spinal muscular atrophy type 2 (SMA2).

“It’s important to remind people that we are here and are doing great things in this realm,” said Webb. “I don’t think historically that we’ve been out in front publicizing what we do well. Sharing that with our colleagues so that they know we are a resource, that we can work together and collaborate, especially with the schools close to us, is really beneficial.”

“The opportunity to promote Wright State and our Office of Disability Services and to show that we are still leading the way is really valuable,” said Webb.