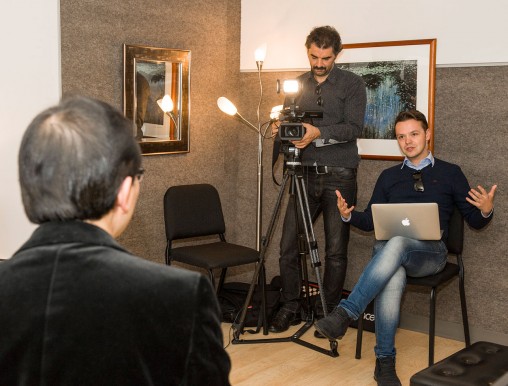 Scenes of Wright State music students performing and interviews with faculty members will be featured in a Bosnian television program commemorating the 20th anniversary of the Dayton Peace Accords.

A Bosnian TV news crew visited Dayton to interview Wright State University faculty and others in the community as part of an hour-long feature on the peace agreement.

The feature will broadcast on the public broadcasting system in Bosnia and Herzegovina on Nov. 21, the anniversary of the signing of the peace accords.

The TV program is a “way to offer our viewers, especially the younger generations who don’t remember the wartime or the Dayton Peace Accords, that links between our two communities are very strong,” Bilaloviç said.

Bilaloviç and videographer Emir Ibiahimoviç spent two weeks in the United States, traveling to Washington, D.C., New York, Boston, Denver and Dayton to interview many of the key negotiators of the Dayton Peace Accords.

The TV feature will include two segments: a retrospective on the peace negotiations and agreement and a look at personal and community relations, with a focus on culture.

Bilaloviç and Ibiahimoviç visited Wright State during Accords: Peace, War and the Arts, a celebration of the Dayton Peace Accords and the Dayton Literary Peace Prize. Sponsored by Wright State’s Ohio Center of Excellence in Collaborative Education, Leadership and Innovation in the Arts (CELIA), Accords featured a photography exhibition, concert and literary conference.

The crew also filmed scenes at Harmony in the Heartland: A Concert for Peace on Oct. 25 in the Schuster Center. They also interviewed Dayton Mayor Nan Whaley, Dayton Commissioner Matt Joseph, members of the Slavic Club of Dayton and Sharon Rab, founder and co-chair of the Dayton Literary Peace Prize.

Bilaloviç said he was interested in talking to Wright State faculty about how the world communicates through art.

“We’re here to discover arts-driven people who know art is the way to transcend conflict that is just beginning or has just developed in order to achieve peace,” he said.