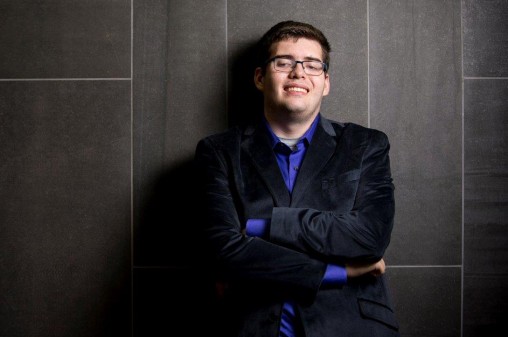 Wright State student Mitchell Schneider is flourishing in the university’s world of physics. The sophomore is majoring in both physics and math and is carrying a 4.0 GPA. (Photos by Will Jones)

He balanced his mother’s checkbook when he was only 4 years old. In second grade, he graded his classmates’ math tests. And he idolized Albert Einstein, the physicist who developed the groundbreaking theory of relativity.

“I was the kid who read Einstein’s autobiography for fun,” said Mitchell Schneider. “I think my elementary and middle school library had to ship in extra Einstein books because I flew through them.”

Today, Schneider is a sophomore at Wright State University, majoring in both physics and math and carrying a 4.0 GPA.

Surprisingly, Schneider was originally poised to major in earth and environmental sciences because of his interest in geology and rock collecting.

But he changed his mind after hearing internationally known theoretical physicist Michio Kaku speak at Wright State in 2014.

“Every time that man said multiverse (the idea of multiple universes), I lit up like a disco ball,” Schneider recalled.

Recognizing Schneider’s love affair with physics at the lecture, one of his friends told him to “cut the BS” and pursue his passion. So Schneider changed his major to physics the next day.

“Physics brings order to a life at times that seems chaotic,” he said. “That’s why I like it.”

Schneider grew up in the Cleveland suburb of Lakewood. His father died when he was 4. His mother works for the Cleveland Clinic as an executive assistant.

At age 5, Schneider was diagnosed with autism spectrum disorder, which features a wide range of symptoms, skills and levels of impairment or disability. Symptoms can include repetitive patterns of behavior and deficits in social communication.

But the diagnosis did little to hold Schneider back. In fact, it fueled his fire.

He was accepted at Case Western Reserve University, a top-ranked private research school in his native Cleveland. However, he turned it down for Wright State.

Schneider said Wright State was not only academically strong, but more affordable and modern. And he said it felt like home. The clincher came during a campus visit with a large group of high school students when Wright State officials opened up a lab just for him to see.

“They are willing to go over and above,” Schneider said. “And it has a human side to it. Even though there are 18,000 students, you don’t feel like you’re 18,000 students. I can’t go one day without walking down the halls and somebody knowing my name. You want to go where you’re going to find your place.” 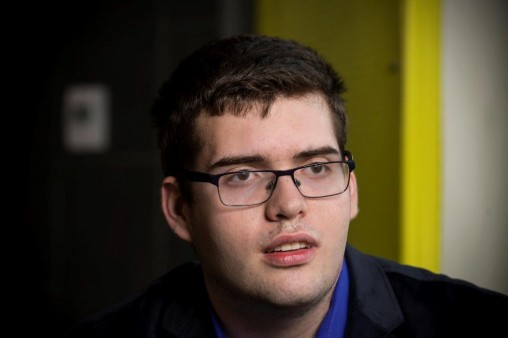 Outside of class, Mitchell Schneider is involved in the Ohioans with STEM Ability Alliance and in College Against Cancer. He also gardens and  collects rocks.

But going off to college was a big step for Schneider. On his first day he was taking Calculus II and General Physics II taught by some very tough professors. At the same time, he was trying to make friends and fit in.

It was having to handle a lot of new stuff all at once, something Schneider doesn’t like.

“Nothing prepares you for the first day of college,” he said. “Going to college is scary because it involves lots of change.”

But he had help from the Raiders on the Autism Spectrum Excelling (RASE), an Office of Disability Services program that offers transition coaches and mentors.

The program, developed in 2012 by Associate Director Heather Rando, has been a success with students on the autism spectrum because it provides support in key areas such as social skill development, time management and self-advocacy. The students often just need practice in skills they have never sharpened, such as communicating appropriately and effectively in classroom discussions or explaining their disability accommodations to instructors.

“RASE provides an individual level of coaching to develop the ‘soft skills’ required for students to have an enriching college experience that leads to a successful transition to a career in their field of interest,” said Rando.

Schneider is confident that Wright State is giving him the tools and support to make it big.

“If you’re willing to put in the work here, everyone is going to know your name and you’re going to be able to succeed,” he said.

Schneider’s career goal is to teach at the college level and conduct research.

“I like the quantum side of physics,” he said. “I really want to work in the particle nuclear relativistic mechanics — the modern physics, the Einsteinian physics.”

When he is not in class or studying, Schneider likes to stay busy with outside activities. He is involved in the Ohioans with STEM Ability Alliance and in College Against Cancer. He is also into rock collecting and gardening. In fact, he grows orchids in his dormitory room.

“There are two sides of life. You’ve got to have that academia balance and that social balance,” he said. “Home is where the heart is, and my heart is here.”