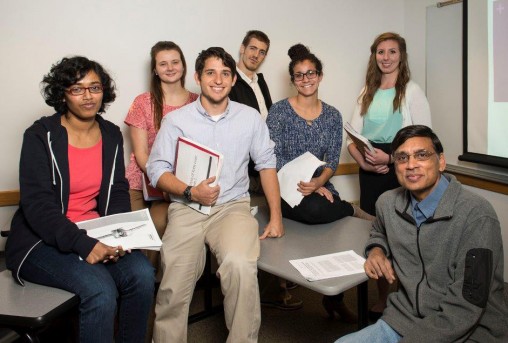 A group of graduate students in Wright State University’s biomedical engineering program got a personal, up-close look at the tattered torso of TWA Flight 800, which exploded and crashed into the Atlantic Ocean in 1996.

A large portion of the aircraft was reconstructed by National Transportation Safety Board (NTSB) investigators looking for the cause. It currently sits in a Virginia warehouse.

“It was a once-in-a-lifetime thing,” said Tarun Goswami, professor of biomedical, industrial and human factors engineering and orthopaedic surgery. “The person in charge of the investigation was the person who gave us the presentation on design issues. We learned quite a lot.”

Goswami took six of his students to the Washington, D.C., area on Nov. 4-6 to meet with officials at the NTSB and the Food and Drug Administration (FDA) and learn how government regulators analyze equipment failures and work to design systems that don’t fail.

The group first visited the labs of the FDA in Silver Spring, Maryland, where medical devices are tested. The students learned how devices such as incubators and pacemakers are certified and how potential problems are identified.

“With the design and analysis of medical devices, the students have to know what the regulatory systems are, how to qualify the products, how they can market them,” said Goswami. “It’s very important that we get to see that first-hand from the FDA’s perspective and know also the care that goes into these things.”

He said it was an eye-opening experience for students on how to analyze failures and design equipment so it does not fail.

Zohora, of Bangladesh, said she learned how to do failure analysis on metals, polymers and other materials.

Suhr, of Springboro, said the highlight of the trip was talking to the regulators.

“I really just appreciated being able to pick their brains about how they work and what they do,” she said. “When we’re in a classroom environment, it’s difficult to understand how the real world works. It’s good to understand how to approach a problem from a professional mindset.”

Wright, of Oakwood, echoed that.

“It inspires me to keep finishing strong in school to get a job like that when I’m done,” he said. “It definitely showed that what we’re learning here is what we’ll have to use for the world out there.”

The students also toured a warehouse in Ashburn, Virginia, that houses the reconstructed wreckage of TWA Flight 800, which exploded and crashed shortly after takeoff from Kennedy International Airport, killing all 230 people on board. The NTSB concluded that the probable cause of the accident was an explosion of flammable fuel/air vapors in a fuel tank.

“It was just amazing to see how they were able to fit all of the pieces together,” said Weiss, of Strongsville. “It was kind of almost eerie to see the plane as it was before it crashed.”

The next day, the students visited the NTSB’s main lab in downtown Washington, D.C. The chief of the lab hosted them for three hours and told them how the NTSB investigates failures related to highway traffic, air travel and pipelines.

“The highlight was seeing where my degree can go and seeing what impact it can make on a lot of people’s lives,” said Soto, of Cleveland.

Goswami said his students returned to the classroom eager to learn more.

“I came back with an excited bunch of 20-year-olds,” he said.