Nursing professors honored for research on bath salts and pregnancy 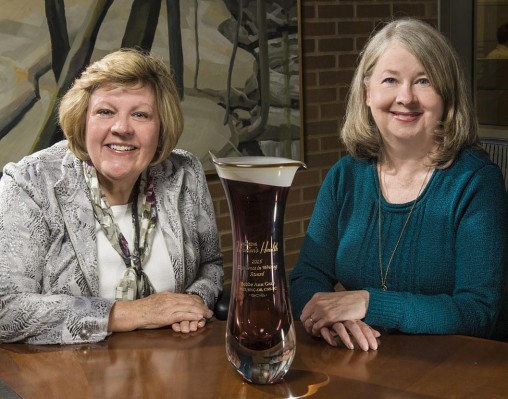 College of Nursing and Health faculty members Cindra Holland, left, and Bobbe Ann Gray were honored by the Association of Women’s Health, Obstetric and Neonatal Nurses for their research on the effects bath salts can have on pregnant women and their babies. (Photo by Erin Pence)

A paper by two Wright State nursing faculty members was honored by a national nursing association for providing vital information to health care professionals about the effects bath salts can have on pregnant women and their babies.

Bobbe Ann Gray, associate professor in the College of Nursing and Health, and Cindra Holland, assistant professor and associate director of the Nurse Education Concentration, received the 2015 Excellence in Writing Award from the Association of Women’s Health, Obstetric and Neonatal Nurses for their article “Implications of Psychoactive ‘Bath Salts’ Use During Pregnancy.”

They received the award at the association’s national convention in Long Beach, California.

The article was published in 2014 in Nursing for Women’s Health, the association’s clinical practice journal. The journal circulates to more than 25,000 nurses who care for women and newborns.

Bath salts is a common name for recreational designer drugs that contain synthetic chemicals similar to amphetamines. They are highly addictive. The drugs can cause agitation, paranoia, hallucinations, chest pain, increased pulse, high blood pressure and suicidal thinking and behavior.

Usage of bath salts escalated in the U.S. from 2010 through 2012, following rapid spread of the drug in Europe. Since a federal ban on the major ingredients in the drugs in October 2011, usage has declined though they are still available online.

“One report we read said they were probably the worst drug that had come out on the market,” Gray said.

Gray and Holland began researching the use of bath salts at the height of their popularity. They wanted to provide information to nurses to help them understand how the drugs affect pregnant women.

“The nurses at the hospital were starting to become aware of it, seeing more and more of it,” Gray said.

It can be challenging for health care professionals to know whether a patient has taken bath salts, the researchers said. The drug does not reliably show up in urine screenings, and the drugs’ effects often resemble other drugs like LSD or ecstasy.

Holland said the researchers sought to answer such questions as “how do these particular drugs act in the human body and how does it affect a growing fetus? Were they similar to some of the other drugs that we were seeing and were the causing some of the same problems we were seeing in high-risk problems?”

Gray and Holland found that patients who took bath salts are often violent, have high blood pressure and pulse rate and are incoherent.

“Nurses have to worry about the physical complications, the safety complications for the patient who may have done some violence to themselves and the possibility of them becoming violent toward the caregivers, which is big problem,” Gray said.

They also found a fairly high pregnancy loss rate among women who admitted to using bath salts while pregnant, the researchers said. Babies born to women who took bath salts have physical problems with withdrawal and can expect long-term consequences with learning disabilities and behavioral issues.

Gray and Holland plan to follow up on their bath salts research in a few years. They found that after use of the drugs in Europe declined there was a resurgence of usage. They expect to see a similar pattern in the United States.

They are currently working together on another article that looks at new guidelines for stroke and how a high-risk pregnancy affects a woman’s future risk for stroke.

Holland and Gray say they are interested in research as a way to advance the nursing profession.

“It’s that evolving circle of giving back to our profession,” Holland said.

“Nurses essentially spend their entire day collecting data. That’s what we do,” Gray said. “We collect data, and we analyze data.”