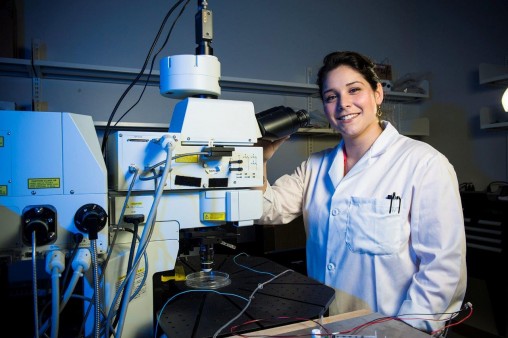 Resting behind black, sliding, barnlike doors designed to minimize outside light is an array of sophisticated microscopes, one capable of magnifying at the molecular level.

The microscopes are the treasures in Wright State’s new Microscopy Core Facility, housed on the second floor of the university’s Neuroscience Engineering Collaboration Building. And the high-tech equipment is available for use by students, faculty, staff, post-docs and even outside researchers.

“Some laboratories have the ability to personally fund their own highly specialized equipment, however this is usually a very substantial investment,” said Hanna Gabriel, manager of the Microscopy Core Facility. “This shared Microscopy Core Facility provides high end/specialized instruments and technical resources for experiments and analysis that could not be otherwise afforded by individual laboratories.”

The facility houses confocal microscopes, which eliminate out-of-focus light. It also has several fluorescent microscopes and a two-photon excitation microscope, which enables deeper penetration of tissues. And then there is the Holy Grail — a transmission electron microscope that uses a beam of electrons to form images with dramatically higher resolution, capable of collecting detailed, stable images of cellular structures and individual neuronal synapses/connections up to 200,000 times magnification.

The facility is available to any department on campus and so far has been used by Biology, Biochemistry and Molecular Biology, Engineering and Neuroscience, Cell Biology and Physiology.

“The Microscopy Core Facility is open to all researchers on campus that require state-of-the-art imaging for their projects,” said David Ladle, facility director and associate professor of neuroscience, cell biology and physiology. “Hanna has been instrumental in finding new ways to apply these techniques to support not only biologists but engineers as well. While students eventually move on, the user base of the core facility is expanding.”

Gabriel’s job is to help train researchers on specimen sectioning/processing and data analysis, in addition to proper use of the various microscopes. She has already trained more than 40 new users. Services include one-on-one training and guidance for use of instruments and analytical techniques, assistance with design and interpretation of experiments, hands-on assistance with tissue processing and imaging.

Gabriel was able to use the lab in her own master’s research, research that she normally would have had to complete by outsourcing some of the microscopy work. Her master’s project investigated how injury and chemotherapy can impair proprioception, the body’s ability to sense the position of its limbs in space, such as being able to close one’s eyes and touch the nose or touch two index fingers together behind the head.

Proprioceptive feedback can be corrupted under conditions like chemotherapy or trauma, where peripheral nerves are damaged or their ability to encode sensory information is impaired. Patients and non-human animals that are subject to these kinds of injuries express difficulties with controlling movement in ways that suggest an association between damage of sensory neurons and behavior.

Gabriel’s research focuses on a specific anti-cancer drug that is very effective but can sometimes cause patients to develop proprioceptive impairments seen as problems with coordinating movement (loss of dexterity and sensory ataxia).

“Being able to figure out why that’s happening and potentially solve the problems would be very beneficial to those patients. We’re on the way to working that out,” said Gabriel, who obtained her master’s degree in physiology and neuroscience at Wright State last May but continues the research.

Gabriel grew up in the Akron, attending Revere High School in Richfield.

“I was always attracted to biology going through high school,” she said. “I always really enjoyed the sciences, asking questions and solving problems.”

Gabriel chose to attend the College of Wooster because of its focus on independent undergraduate research. She had to develop a novel research idea, come up with the methods and implement the research.

She was interested in both proprioception and sports medicine and worked as a student athletic training assistant, which got her interested in orthopaedics, neuromuscular control and neuroscience. So she decided to conduct research on Functional Ankle Instability.

After people sprain their ankle a first time, they are more prone to re-sprain it because damage to the neurofibers reduces the body’s ability to sense the angle of the foot and makes it more likely that people will come down on the side of their foot. Gabriel won a grant to do the work as an independent undergraduate research project. She won departmental honors for the research, which culminated in a written thesis and oral defense.

As she was finishing up her bachelor’s degree in neuroscience in the spring of 2013, she was trying to decide whether to go to medical school or pursue a career in research. In April of that year, Gabriel attended a seminar on proprioception at Wooster conducted by Tim Cope, then director of the Wright State University and Premier Health Neuroscience Institute and chair of neuroscience, cell biology and physiology at Wright State.

During the seminar, Cope detailed his studies on sensory motor circuitry.

Cope urged Gabriel to consider pursuing a master’s degree in physiology and neuroscience at Wright State. So she visited Wright State, applied and then left for Europe for two months’ of traveling to mull her future prospects. Then came an email from Wright State, offering a full-tuition scholarship.

“I was actually in Prague when I found out I was accepted,” she said.

After getting her master’s degree at Wright State, Gabriel took the job as manager of the Microscopy Core Facility.

“There are a lot of opportunities here. Everybody is very willing and very eager to help you succeed,” she said of Wright State. “The second I stepped on campus, there were a bunch of people looking out for me. I love the collaborative effort.”