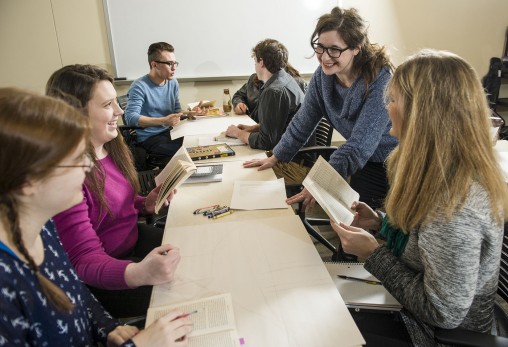 Crystal B. Lake, associate professor of English language and literatures, asks her students to create something inspired by readings examining the role of weather in literature in a new course, Great Books and Bad Weather. (Photos by Erin Pence)

Robinson Crusoe was stranded on a remote island after a hurricane. Mary Shelley began writing “Frankenstein” during the dreary “Year Without a Summer.”

The role of weather in literature is explored in a new undergraduate course, Great Books and Bad Weather, taught by Crystal B. Lake, associate professor in Wright State’s Department of English Language and Literatures.

What sets Great Books and Bad Weather apart from traditional literature courses is its project-based curriculum. Students research, design and create something new inspired by the literature they read. That could be an app, artwork, an adaptation, a board game or a podcast.

“The spirit of this course is to come to students and ask: what ideas to do you have, how big are they, how neat are they, what kind of difference in the world can they make?” Lake said. “Let’s test these ideas out. Let’s engage in this spirit of being passionately inspired by something.”

All the assigned texts are related to weather, nature or the environment. Readings include “Robinson Crusoe” by Daniel Defoe, Mary Shelley’s “Frankenstein,” Jonathan Swift’s poem “A Description of a City Shower,” Lord Byron’s poem “Darkness” and excerpts from “Paradise Lost” by John Milton.

“I picked texts that I knew were prominently related to weather events or were by writers who were interested in climate,” Lake said.

The 18th and 19th centuries saw the rise of popular science and standardized methods for measuring weather, Lake said, “so naturally weather shows up in lots of novels and poems from the period.”

“Frankenstein” and “Darkness” were both written after the eruption of Mount Tambora in Indonesia in 1815. One of the most powerful in recorded history, the eruption lowered global temperatures, leading to global cooling and worldwide harvest failures during the Year Without a Summer in 1816.

Lake developed the course in consultation with David Dominic, professor and chair of the Department of Earth and Environmental Sciences.

Dominic has also lectured in class on the difference between weather and climate and to show that climate has changed measurably over the time covered by the readings for the course, from 1700 to 2014, and continues to change.

“The course doesn’t focus on climate change directly but does ask students to re-evaluate the perception that humans are separate from natural systems, like weather and climate,” he said. 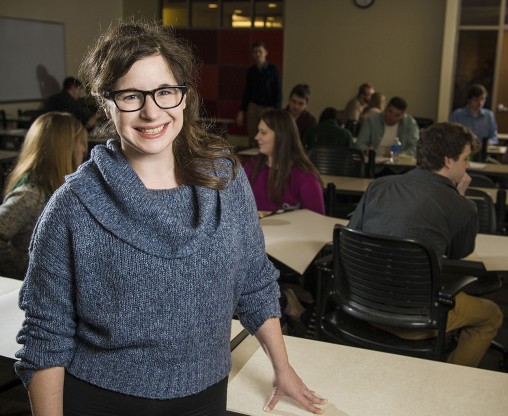 Crystal Lake believes project-based courses like Great Books and Bad Weather will help students get excited about and inspired by literature.

The course has helped Dominic learn that literary analysis has more in common with science than he ever imagined.

“Both begin with observations that support ideas or explanations, which are then tested with further observations,” he said. “Working with Crystal has got me thinking about other ways of joining arts and sciences, for myself but especially for students.”

“Climate change is a problem that requires an expertise of a lot of different kinds of thinkers,” Lake said.

Lake believes courses like Great Books and Bad Weather will help students get excited about and inspired by literature. With the help of her graduate students, Lake has also incorporated new methods found in the field of the digital humanities into the course. Thanks to advances in technology, the humanities and literature are a booming field right now, Lake said.

“There is an excitement about literary studies out there in the world that I was eager to tap in to,” she said.

Lake came up with the concept for a project-based course while teaching at the Georgia Institute of Technology, where she served as the Marion L. Brittain Postdoctoral Fellow. Georgia Tech fosters a project-based environment. So Lake designed courses in which her students built things like architectural models, apps and interactive websites — all inspired by what they read in class.

Lake calls this type of course an Inspire Course. The name emphasizes literature as an active thing and something from which she and her students can draw inspiration to create new things.

“I believe fundamentally that literature has the power to help us think in new ways,” Lake said. “I wanted to reach out to students who were inspired and looking for sources of inspiration.”

Lake’s students will present their projects to the public on April 22 at 3:30 p.m. on the fourth floor of Millett Hall as part of a showcase of undergraduate work in the Department of English Language and Literatures.