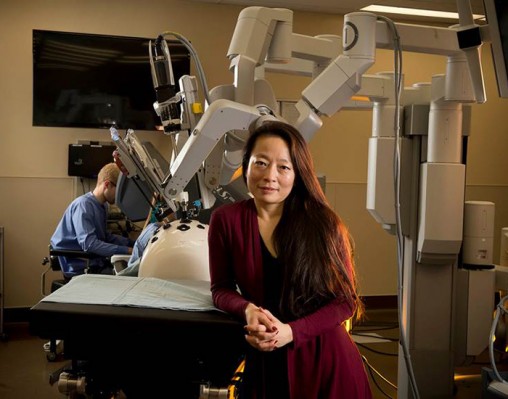 Wright State medical researcher Caroline Cao is investigating how to improve the use of surgical robotics in abdominal surgery.

Wright State University researchers are among 20 teams of researchers from Ohio universities that will participate in a state training opportunity designed to foster research commercialization and entrepreneurship.

I-Corps@Ohio program, modeled after a similar program launched by the National Science Foundation in 2012.

“I-Corps@Ohio provides faculty and students an invaluable learning experience about commercialization and entrepreneurship,” said Robert Fyffe, vice president for research and dean of the Graduate School. “We are very excited to learn that professor Caroline Cao’s team has been selected to participate in the program this year, as the first Wright State team to participate in this program.”

Elana Wang, director of the Office of Technology Transfer, and Hugh Bolton, director of commercialization, worked with Cao, the Entrepreneurs Center in Dayton and I-Corps@Ohio to help form the faculty-student-mentor team that will benefit from this training.

“The training is an effort to help university researchers capture the commercial rewards of their discoveries to reinvest in additional discovery,” said Ohio Department of Higher Education Chancellor John Carey.

The training is the second installment of a program launched last summer, which continues over a three-year period as it connects to the local innovation infrastructure.

Ohio has historically ranked high in terms of university research, but officials have said that the ranking in terms of commercializing the results of that research should be higher.

The I-Corps@Ohio program provides hands-on training to Ohio faculty and students in the Lean Launchpad Business Model Canvas process, which establishes a mechanism for evaluating the market need and commercial potential of their proposed technologies. At the conclusion of the technology commercialization training program, teams will be able to make market-based judgments on the potential fit of their technologies with customer needs, and make informed decisions on whether to go forward with startup companies or other forms of technology commercialization.

The I-Corps@Ohio program will train 60 faculty teams over a period of three years.