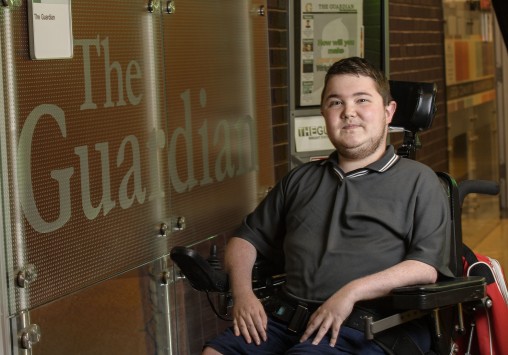 Alan Hieber, a senior mass communication major, stays active by competing in races and by covering sports for The Guardian student newspaper. (Photo by Erin Pence)

Many people in Alan Hieber’s situation watch races from the sideline or simply don’t attend sports events at all. Others participate in alternative sports that may be easier for their circumstance. But Hieber competes in sports and reports on games despite physical challenges.

Sports became engrained in Hieber at a young age. Growing up in a family of runners and watching sports on TV has helped him understand sports on a deeper level since competing in some sports is not always an option.

“My sports writing has been a source of motivation to never give up no matter what challenges I face currently and may face in the future,” said Hieber. “The interviewing and writing process allows me to stay involved with sports and not think about my circumstances as often.”

Despite the challenges, Hieber displays an attitude much like his athletic inspirations: Tatyona McFadden, a wheelchair racer with spina bifida, and Paralympic snowboarder Amy Purdy, who spoke at Wright State in February.

“The message (Purdy) had that stood out to me was how losing her legs didn’t disable her but enabled her,” said Hieber. “That is the same perspective I have about my circumstances. I feel enabled to write and race despite physical hurdles.”

McFadden inspires Hieber because “she overcame a life-threatening disability as a child to become one of the elite athletes in her sport. This motivates me to keep racing myself,” he said. “When I watched her win the Boston Marathon on TV last month, I was brought to tears in awe of her performance and post-race interview.”

Hieber has kept up with articles by Tom Archdeacon, a sports writer at the Dayton Daily News, since he was young. Hieber likes how Archdeacon captures a detailed snapshot of someone’s personality and makes the reader feel like they know that person.

He enjoys being part of an audience watching football and basketball for its faster pace but writes about any athlete or sport. As a reporter for Wright State’s student newspaper, The Guardian, he has covered softball, running and basketball.

“Being able to ask Wright State basketball coaches and players questions for media availability after games and see their reactions fresh off of the court was an amazing experience,” said Hieber.

The Guardian gave Hieber rare opportunities to meet famous athletes such as cornerback Malcolm Butler, who helped the New England Patriots win the Super Bowl in 2015. Hieber also met Chantae McMillian, an Olympic heptathlete who trains in Kettering and mentors college track athletes in Dayton and at Wright State.

He plans to pursue a career in freelance writing about local sports for various media companies, including the Dayton Daily News, or for a national publication called Runner’s World.

Hieber tells other students with disabilities that it’s OK to struggle along the way but to persevere and pursue their passions.

“Whatever disability you might have, it is alright to be nervous or afraid of struggling some days, and it is not a sign of weakness,” he said. “If there is a career field you have a passion for, there are probably avenues for you to succeed at it even though you may do things a little differently than some people.”

Hieber continues to persevere not only with writing about sports but competing in them himself. He participates in the Ohio River Road Runners Club with his family and competes in local 5K and 10K races.

“Though I’m usually the only power wheelchair competitor, I get the feeling that I belong with the other runners,” he said. “I also like the feeling of the light breeze as I wheel forward. I love the hills because I’m able to pick up speed and sit up in my chair without much effort. Each of these aspects of racing combined gives me an opportunity to forget about whatever struggles I may be going through physically or mentally.”