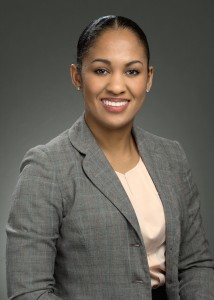 Jasmin Scott-Hawkins is a member of the Boonshoft School of Medicine class of 2016.

After Jasmin Scott-Hawkins earned a bachelor’s degree and completed her pre-medical at University of California, Los Angeles (UCLA), she felt compelled to work with the underserved to help reduce health disparities.

She delayed going to medical school for a year, working as a clinical research coordinator for two women’s health clinical research studies at Charles Drew University in Watts, California. This experience enabled her to fulfill her passion for serving underserved communities.

“Early exposure to disparities and inequality through personal relationships, community outreach and international travel fueled my passion for reducing disparities and improving the quality of life for underserved communities,” said Scott-Hawkins, who grew up in Los Angeles. “These experiences left me absolutely appalled and filled with the fervor to collaborate with others to make a positive change.”

The U.S. Public Health Service has taken note of her commitment to public health and will recognize Scott-Hawkins with a 2016 Excellence in Public Health Award at the Wright State University Boonshoft School of Medicine commencement ceremonies on Friday, May 27, at the Benjamin and Marian Schuster Performing Arts Center in downtown Dayton.

Throughout medical school, Scott-Hawkins has focused on a holistic approach to prevention, reducing disparities and improving the quality of life of those in underserved communities. She plans to become a child and adolescent psychiatrist who engages in culturally responsive, integrated care.

“I plan to combine my training in medicine and public health to devote my practice to serving underserved communities,” she said.

She pursued both her Doctor of Medicine and Master of Public Health degrees (M.D./M.P.H.) through the Boonshoft School of Medicine Physician Leadership Development Program (PLDP), a dual-degree program through which medical students can obtain a master’s degree in public health or business while pursuing their medical degree over five years.

She spent her third year of medical school finishing her M.P.H. coursework, practice placement and culminating experience. She worked as the PLDP program graduate assistant. She was the first PLDP student to complete a nine-month, longitudinal clerkship in psychiatry, which helped solidify the structure and format of that clerkship for dual degree students.

“Her longitudinal clerkship clinical time at the Wright State Counseling and Wellness Center and a local homeless clinic allowed her to gain a much stronger experience in disparities and continuity of care,” said Sabrina Neeley, Ph.D., PLDP director. “She will become the kind of physician to which she aspires and will improve the quality of life for many patients.”

During her M.P.H. graduate year, Scott-Hawkins and another medical student developed, received grant funding for and implemented an evidence-based program to teach weekly sessions on parenting and safer sex education classes to homeless and runaway adolescents at a local shelter for young people.

“This program was so successful that other students who followed Jasmin in medical school have continued the instruction and program evaluation,” Neeley said. “The program has been presented in poster sessions at national conferences.”

Scott-Hawkins has demonstrated leadership throughout medical school. She has been a leader in several organizations, including the Student National Medical Association (SNMA), where she served as the national publications committee co-chair and editor of the Journal of the SNMA. She also served on the SNMA regional conference planning committee, planning local events. She served as a student representative on two faculty search committees. She has been active in Phi Rho Sigma Medical Society, a national social and community service organization, at the Boonshoft School of Medicine.

Scott-Hawkins was one of 13 medical students nationwide selected in 2015 for the Oliver Goldsmith, M.D., Scholarship for the Promotion of Culturally Responsive Care, which celebrates medical students’ efforts to improve the health care of underserved communities.

She was ecstatic on Match Day, March 18, when she learned that she had matched into the psychiatry residency program at the University of Southern California in Los Angeles.

“Match Day was an absolutely exhilarating day where dreams became reality,” she said. “Matching into my top choice residency program where I will receive the training that I need to best serve those most in need and to reach my career goals was an absolute blessing.”

After her residency, she plans to pursue fellowship training. “I couldn’t be more pleased with the training that I received through the Boonshoft School of Medicine and the Physicians Leadership Development Program,” Scott-Hawkins said. “I connected with exceptional mentors and received outstanding opportunities to pursue my passions and to experience professional and personal growth while positively impacting the community. The training that I received provided me with a solid foundation to become the best physician and public health professional that I can be.”