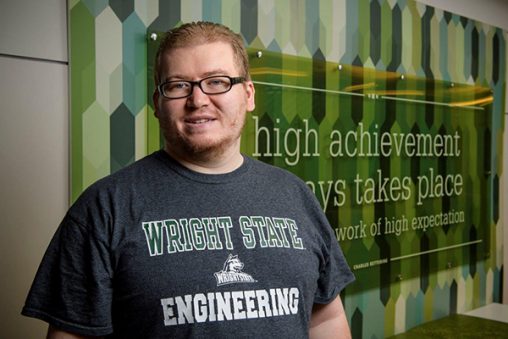 On the heels of getting his GED, Nickolas Hayden is flourishing as a computer engineering and philosophy major at Wright State. (Photo by Erin Pence)

At age 32, Nickolas Hayden decided it was time to make up for lost time and get his high school degree. So he did just that, sailing through General Equivalency Diploma (GED) classes in just six weeks.

Three weeks later he was a student at Wright State University. And today — after a semester majoring in computer engineering and philosophy — Hayden is carrying a 3.6 grade point average and made the Dean’s List in the College of Engineering and Computer Science.

“I’m mainly doing this for myself,” he said. “I have a love of knowledge.”

Hayden looks very much the college student. On this particular day, he is flanked by a book bag and water bottle at a table in the atrium of Russ Engineering as he reads his tablet computer.

Hayden grew up in East Dayton with his four brothers and three sisters. He developed an early interest in technology, tinkering with VCRs and other electronic equipment.

“I just had a knack,” he said. “I was able to figure things out through trial and error. I was basically self-taught.”

When Hayden was in eighth grade, he began to suffer migraine headaches and anxiety attacks.

“They got worse and worse, and I wasn’t doing well in school,” he said.

The migraines got so bad that Hayden had to be hospitalized at one point.

Wracked by health issues and anxiety attacks, he spent much of his teens and 20s at home, venturing out only in the company of friends or family.

After getting help from a counselor, Hayden decided to make a major change in his life.

“I was tired of living that way,” he recalled.

Hayden, who did not have a high school diploma, began pursuing his GED last October, taking classes at the main branch of the Dayton Public Library three days a week.

“I was determined. I studied hard,” he said.

He got his reward in December.

“I was ecstatic and full of pride when I finally received my GED in the mail,” Hayden said in a newsletter article published by the Miami Valley Career Technology Center. “When I opened it I was smiling ear to ear. I realized that with this GED diploma my life would change, and I would have more opportunities because of it, like going to college.”

He immediately enrolled at Wright State, launching his college career in January.

“I knew people who went here,” he said. “And it had a good reputation, especially in engineering.”

At first he felt swallowed up by the size of the campus and had trouble finding his way around, especially in the tunnels. But he soon settled in, throwing himself into the study of computer engineering and philosophy.

“Philosophy I just find interesting — all of these questions,” he said.

Graduate student Katie Elizabeth Hoskinson-Burks, an English instructor, had Hayden in her class.

“He was an inspiring student in class because he overcame so many struggles to succeed,” she said. “He represents a section of the student population that isn’t always spotlighted, but this section does make up a significant portion of the Wright State community.”

Hayden took a heavy load his first semester — 19 credit hours. He walked away with four A’s and two B’s for a 3.6 GPA.

He says his secret is just studying hard.

To relax he listens to rock ’n’ roll, favoring the music of the grunge band Nirvana as well as other alternative bands.

After graduation, Hayden may pursue a career in computer programming or create apps or video games.

For now, he’s still getting comfortable in the college environment, nourished by the friendly confines and academic stimulation at Wright State.