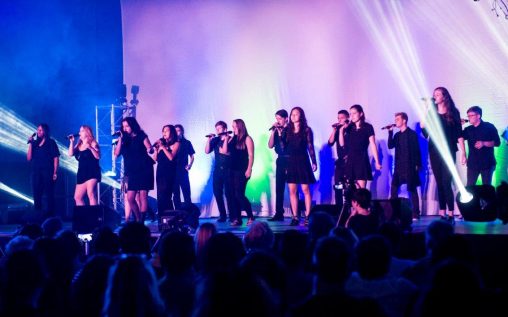 Camp A Cappella attracted 350 middle school, high school and college students as well as educators and adults for a week packed with activity. (Photo by Will Jones)

You could hear it long before you saw it. The throbbing beat and chorus of voices were pulsing through Wright State University’s Student Union.

Stepping inside the Apollo Room revealed an ensemble group on stage dressed in slick, black Saturday night concert wear and bathed in red and blue lights.

The music flowed through the darkened hall, where a sea of family, friends and others filmed and photographed the singers on their smartphones.

Hundreds of singers participated in this year’s six-day camp, which ran from June 25-30 and has grown impressively over its four years of existence.

The camp is the brainchild of co-founders Deke Sharon, a pioneer of contemporary a cappella style; and Brody McDonald, who teaches and directs the ETHOS, a cappella group at Wright State and is director of choirs at Kettering Fairmont High School.

“This was a dream we had. If we build it, will they come?” said Sharon, who had just finished a telephone interview with a New Zealand news outlet. “Four years later, we have 350 attendees and sold out the camp. We could have had another 50 easily.”

A cappella music is group or solo singing without instrumental.

“I fell in love with the idea of marrying a cappella and pop music,” said Sharon, vocal producer for NBC’s “The Sing Off.” “It’s the most natural thing in the world.”

Singers at the camp included middle schoolers, high schoolers, college students, educators and adults who were just there to have a little fun. The week is packed with activity. Besides sharpening their singing skills, participants have the opportunity to learn about live sound, percussion, lighting, choreography, album production and music arrangement at beginning and advanced levels.

Sharon said many of the participants have had no formal training.

“I’m a firm believer that everybody can sing; if you can speak, you can sing,” he said. “Your vocal cords and muscles just need training. And we put people in level-appropriate groups so no one is punching outside their weight class.”

“There aren’t any jerks in a cappella,” he said. “You’ve got to get along. A cappella is about harmony; it’s about teamwork. So the people who show up at this camp are self-selected, and they are wonderful people.”

The singers leave camp having made new friends from around the world. This year, participants came from as far away as Hong Kong.

“This is truly an international experience,” Sharon said.

He says the camp is a way to spread harmony through harmony.

“When you look at our political situation — how divided our country is and how divided the world is — people need the experiences of coming together,” he said. “You meet people who are different than you. You learn how to bridge differences and come to compromise. It’s something our society needs right now.”

The singers at the camp formed 22 small ensembles and two 275-person ensembles. The week climaxed with the groups performing two, two-hour concerts on a stage outfitted with professional sound and lighting systems.

“These a cappella groups here are singing eight-, 12-, 14-part harmonies. They’re doing really complex stuff,” said Sharon. “And in the end, every group is going to get up on that stage with the lights and microphones. In that sense, it’s fantasy camp.”