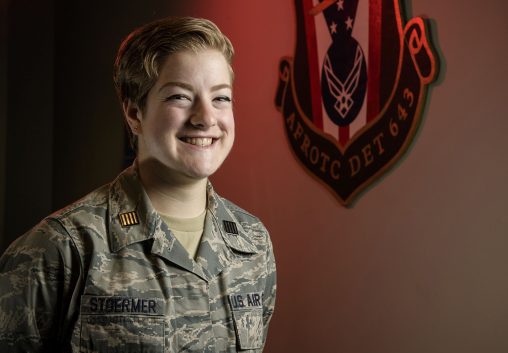 Wright State junior Elizabeth Stoermer grew up with the military being part of her family history and plans to continue the legacy in the Air Force. (Photo by Erin Pence)

A lifelong Dayton-area native, Elizabeth Stoermer grew up with the military being part of her family history. She plans to continue the legacy.

Stoermer, a junior majoring in political science at Wright State University, first became in interest in joining the military after participating in the Junior Reserve Officer Training Corps (ROTC) program as a student at Bellbrook High School.

“I joined junior ROTC for three years and after learning about it, the (military) community and options through the Air Force, I ended up giving ROTC a shot and ended up liking it,” she said.

To Stoermer, the military offers a sense of community, job security, education, travel and benefits for the family. “The Air Force takes care of its people,” she said.

In addition to serving in the Air Force, she hopes to attend law school after college.

Stoermer hasn’t always succeeded in the Air Force ROTC. She failed her first two attempts of the physical fitness tests her freshman year at Wright State. Her next test was scheduled while she was sick. But she was motivated to pass, successfully enduring and pushing through the obstacles.

A natural leader in her community and the Wright State Air Force ROTC program, Stoermer is the cadet wing commander, overseeing the cadet wing, which consists of around 75 cadets.

“I oversee everything that is cadet run,” Stoermer said. “As cadets, we run our community service events, morale events, some recruiting, color guard events, Leadership Lab training, physical training, issuing uniforms and ensuring that all cadets meet standards and regulations.”

Stoermer has had a heart for service in and outside of the military from a young age.

She participated in Girl Scouts, volunteered in her community in grade school and took part in community service in ROTC while in high school.

She is now active in Wright State’s chapter of the Air Force Silver Wings, a group of civilians and AFROTC individuals who participate in community service and professional development.

She has been riding horses since she was 9 years old and is part of Therapeutic Riding Institute, a local nonprofit that teaches horseback riding to adults and children with disabilities. She has helped with lessons at her own stable for seven years.
Outside of serving others, Stoermer enjoys reading, attending concerts and traveling. When she was younger, “my dad told my mom that she needs to stop taking me to the library because all I do is read,” she said.

She has traveled to Canada, the United Kingdom, England, Scotland, Alaska and Washington State.

Attending Wright State was an obvious decision for Stoermer since she is close to her family and has had many family members attend Wright State, including her father.

“I like being able to see my family and go home, and I just like it here. It’s nice and familiar,” she said, adding, “And being by Wright-Patterson Air Force base is pretty nifty.”