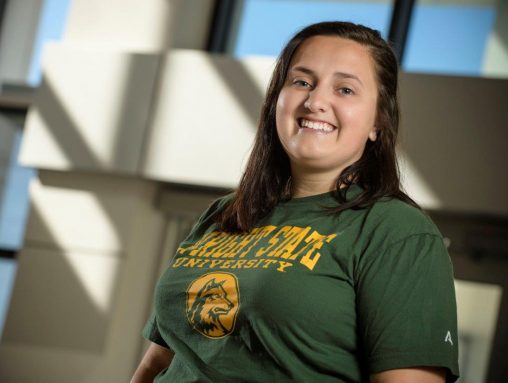 An urban affairs major, Wright State senior Katie Rossman plans to pursue a career working for the government or in nonprofit management. (Photo by Erin Pence)

It was a dry run for what she hopes will be a career. Wright State University senior Katie Rossman spent her summer interning for the Peace Corps in Washington, D.C.

More than 220,000 Americans have served in the Peace Corps in 140 countries, the vast majority in Africa. Women constitute more than 60 percent of Peace Corps volunteers.

During her internship, Rossman also created a survey for the Peace Corps’ Peer-Support Network that was distributed to medical officers in 61 countries.

“After my internship, I could see myself going into the Peace Corps and then working for the Peace Corps,” said Rossman. “Being there resolidified that I want to go. I’ve volunteered my whole life, and I love going international.”

Rossman grew up in Sidney, where her mother, Lisa, is an orthodontist. About 10 years ago, her mother formed a nonprofit called Smiles of Hope and began sponsoring and taking a dental mission team to an orphanage in the African nation of Tanzania.

That led to several trips to the orphanage by Rossman and included one by herself alone as part of a mission trip to Zanzibar through the Seattle-based Growth International Volunteer Excursions.

The orphanage, located in a tiny village near the Kenyan border, is currently home to about 50 orphans.

“I mean these kids were left on the side of the road,” said Rossman, unsuccessfully fighting back tears. “Ten years ago they had nothing. Through my mom, they’ve gotten a lot more. They’ve started farming so now they’re growing their own crops. And there is now a school attached to the orphanage so you have the opportunity to go and teach.”

Rossman enrolled at Wright State after graduating from Lehman Catholic High School in 2013. She initially majored in psychology, switched to business management and then discovered urban affairs with a concentration in nonprofit management.

“I knew I wanted to do something in the nonprofit sector,” she said.

Her degree would enable her to work for the government or in nonprofit management or switch back and forth.

At Wright State, Rossman got involved in the Nonprofit Leadership Alliance, a student organization that offers professional development, contacts in the nonprofit community, opportunities to serve and learn, local workshops, internships, a national meeting and nationally recognized certification. She is currently the group’s president.

Rossman got her internship with the Peace Corps through The Washington Center for Internships and Academic Seminars. It is an independent, nonprofit organization serving hundreds of colleges and universities by providing selected students challenging opportunities to work and learn in Washington, D.C., for academic credit. The largest program of its kind, the center has 70 full-time staff and more than 50,000 alumni, many of whom are in leadership positions in the public, private and nonprofit sectors.