It was a day of both panic and pride for Anthony Bell, a Wright State University biology graduate student who was competing in a national bass fishing tournament on Lake Champlain in upstate New York.

Sept. 23. It was the end of Day Three of the three-day tournament — 30 minutes before final weigh-in — and Bell found himself stranded on the lake when his fishing boat’s propeller was sheared off by a reef.

Failing to appear at the weigh-in would cost Bell any chance of finishing among the top anglers in the 160-person field at the Bass Pro Shops Bassmaster Northern Open #3.

But the gods were with him that day — or so it seemed. A competing fisherman picked up Bell and his fish and got them to the weigh-in on time.

Bell was the first among the finalists to have his fish weighed. And as the fish of each succeeding finalist was weighed, Bell remained at the top — until the very end, when the last competitor bumped Bell to second place. 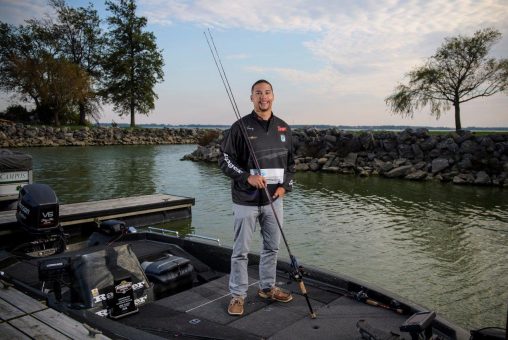 “I was a little bit disappointed, but I was grateful for the opportunity to be there,” said Bell, who found out later that his second-place finish had given him enough points to make him Co-Angler of the Year.

All in all, it was a good day on the water for the 25-year-old Bell, who began fishing when he was 3, has worked for state and federal fish and wildlife agencies, is conducting master’s degree research on fish physiology and is contemplating becoming a professional fisherman.

Watching Bell cast for fish while balancing himself on his boat is like getting tickets to the ballet.

He bullwhips the rod, drawing a melodic whir from the unspooling reel. The line missiles into a looping arc that plops the lure into the water with surgical precision. He can even make the lure skip over the top of the water and slip under a dock or log.

Bell once caught a 13-pound bass while practicing for a tournament. A fish of that size must be held with both hands and is often the subject of YouTube videos.

Bell fell in love with fishing as he grew up in Cincinnati.

Bell would go fishing with his father and caught his first fish, at Lake Isabella in Cincinnati, when he was 3 years old. After that, he spent a lot of time fishing and even doing research into fishing techniques.

He entered his first fishing tournament when he was 18, at Rocky Fork Lake in southern Ohio, and finished third.

Bell earned his bachelor’s degree in environmental science from Thomas More College, a liberal arts school in Crestville Hills, Kentucky, near Cincinnati, where he played slot receiver on the school’s football team.

“It was fun playing football, but my heart was always with fishing,” he said.

After graduating, Bell got a job with the Ohio Department of Natural Resources as a conservation worker. He traveled the entire span of the Ohio River sampling the population and movement of Asian carp, an invasive species.

“They tend to outcompete native species for space and resources,” he said.

In 2014, Bell took a job with the United States Fish and Wildlife Service, an agency within the U.S. Department of the Interior dedicated to the management of fish, wildlife and natural habitats. He worked as an inspector, helping process DNA samples from Asian carp. 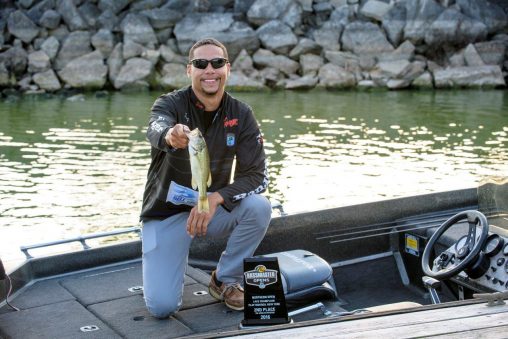 Anthony Bell’s research focuses on changes in the physiology and shape of the bluegill sunfish, which is endemic to North America and abundant in the area.

In January 2015, Bell enrolled at Wright State to pursue his master’s degree in biology.

His research at the Lake Campus focuses on changes in the physiology and shape of the bluegill sunfish, which is endemic to North America and abundant in the area. These changes can signal resource utilization and can affect the swimming performance and survivability of the fish.

Bell collects bluegills from Grand Lake St. Marys at the Lake Campus by using an electrofisher, which relies on electrodes that deliver voltage through the water. The voltage temporarily stuns the fish, enabling them to be caught and evaluated but causing no permanent harm.

When Bell is preparing for a fishing tournament, he spends up to14 hours a day on the water. He says that being successful in a tournament involves practice, preparation, research and understanding the conditions.

Lures are also very important. Bell’s most recent lucky lure is the four-inch Yum Dinger, which resembles an earthworm.

“And some people tend to just have a knack for finding fish,” he said. “A lot of it is instinctual.”

The tournaments themselves usually involve eight hours on the water each day and the catching of three to five fish, which remain alive when they are weighed and are later released. Bell keeps several other fishing rods at the ready so he doesn’t lose any time on the water in case the rod he is using breaks.

“You really have to concentrate,” he said. “There’s a mental toughness that a lot of people don’t give fishermen credit for, but it is something that you have to have.”

Bell credits his sponsors with giving him the support he needs to compete and succeed. His sponsors include Bell Consulting Group, Rod-Techs, Inc., Xcite Baits and Powell Rods.

Bell is thinking of pursuing fishing as a profession.