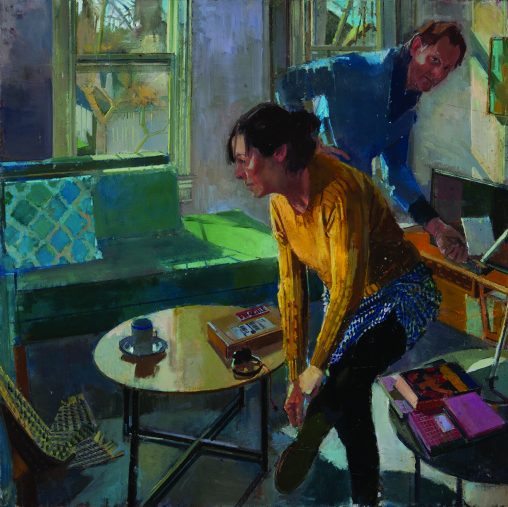 Paintings by Indiana University faculty members Tim Kennedy and Eve Mansdorf are now on display at the Robert and Elaine Stein Galleries through Dec. 4.

Kennedy and Mansdorf are married painters whose artistic pursuits follow the tradition of painterly American realism. In their work, they explore and discover mostly through direct observation. The larger scaled paintings allow development of complex compositions of figures in interiors and landscape. Each artist works in several genres, including still life, landscape and figures in interior and exterior spaces.

Mansdorf received a B.A. in Psychology from Cornell University and an M.F.A. from Brooklyn College. Her work has been exhibited widely, especially in the Midwest and Eastern United States. She has been a favorite artist of the First Street Gallery in New York City, participating in numerous group shows and five solo exhibitions. She has held teaching positions at the New York Studio School, the Cleveland Institute of Art, the New York Academy of Art, the Graduate School of Figurative Art, Dartmouth College and during the summer of 2015 at the Jerusalem Studio School in Civita, Italy. Since 1996, she has been an associate professor at Indiana University. 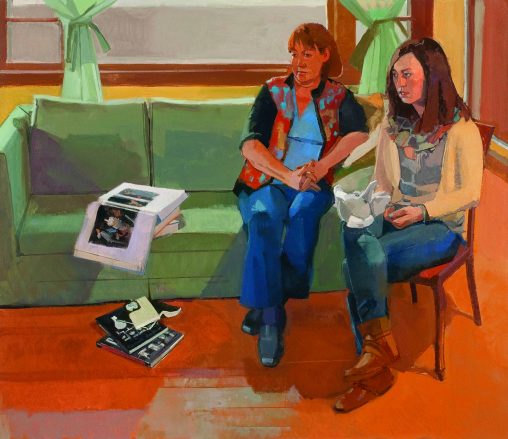 “Lauren and Brenda (with Babar),” oil on canvas, by Tim Kennedy

Kennedy received his B.F.A. from Carnegie Mellon University, an M.F.A. from Brooklyn College and attended the Skowhegan School. He has received individual artist grants from the Pollock-Krasner Foundation, the Indiana Arts Commission, the Arts Council of Indianapolis and the Clark Hulings Fund. He exhibits his work at First Street Gallery in New York and is a senior lecturer of painting at Indiana University in Bloomington. His work embraces all of the genres, but he has repeatedly returned to themes of domestic interior and landscape.

The exhibition is made possible with support by the Ohio Arts Council, friends and members of the Stein Galleries and Wright State’s College of Liberal Arts.

Also on display are selections from the permanent collection.

All visitor parking areas on campus are free, and parking at the Creative Arts Center is unrestricted after 4:30 p.m. on Fridays and weekends. A dedicated parking space for galleries patrons is available during school hours in lot 13. All galleries events are free and open to the public.

For more information on future events and exhibitions, contact the galleries at 937-775- 2978 or visit wright.edu/artgalleries.