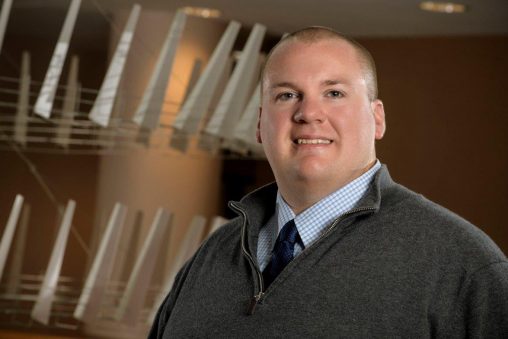 Wright State graduate student Eric North hopes to be social worker at the same hospital where he was treated for leukemia. (Photo by Erin Pence)

He was sitting in a classroom at Sinclair College when he realized something was wrong — and it was terrifying.

Seventeen-year-old Eric North walked out of class and slumped down on the hallway floor. He was too weak to even look for a chair.

When his mother picked him up in her car to take him to the doctor, he had to recline his seat so he could lie down.

North’s words were prophetic. He would be diagnosed with acute myeloid leukemia and told he had a 30 percent of living more than five years. The devastating news that he had blood cancer was delivered by an oncologist at Dayton Children’s Hospital in early 2002.

“I can still picture the shirt he wore. He had a blue shirt. I can picture the tie. It was a blue-and-green-striped tie,” North recalled. “I remember thinking, ‘Man, he is going to tell me something I do not want to hear.’”

The word “leukemia” rang in his ears.

North would spend the next seven months at the hospital, undergoing five rounds of intense chemotherapy. After that, it was many checkups at the hospital clinic and a lot of prayer to fend off the paralyzing fear that the cancer would return. At the five-year mark, he began to breathe easier.

Today, the 31-year-old North is free of cancer and working on his master’s degree in social work at Wright State University. He hopes to land a job at Dayton Children’s Hospital, working alongside the angels who saved his life and with children facing the same fears he once did.

“I’ve grown really close to a lot of people at Dayton Children’s,” he said. “I wasn’t treated as Eric, the leukemia patient. I was Eric, the person, who happens to have leukemia. You felt like you’re treated as family, as a person, and not a diagnosis.”

North grew up in Kettering, the son of a woman who worked as a family support worker at Montgomery County Children’s Services. He attended Miamisburg High School but dropped out.

North later decided to get his General Equivalency Degree and did — at age 16. And in 2002, he enrolled at Sinclair, majoring in criminal justice.

He was just in his second week of classes when his life was derailed by the leukemia diagnosis and efforts to defeat it. At one point, he had 90 percent liver failure.

“I faced a lot of difficulties with the treatment, but I always ended up bouncing back,” he said.

Following months of chemotherapy, North became an outpatient and was heavily monitored for any signs of a relapse, which could have been a death sentence.

“Every time I would go to the clinic, I would tell myself, ‘Man, I really hope this isn’t the day they tell me I have cancer again,’” he said.

Finally, North decided to embrace life instead of dreading death.

“You start to learn to let go of that fear,” he said. “I have to live. I didn’t beat this to live in constant fear. I beat this to live, to be happy and to make a difference and to do what I want to do.”

North, who lives in Washington Township with his wife and 9-year-old son, says his experience has changed his outlook on life. He tries to be grateful for what he has and live each day to the fullest.

“I’m blessed to have a great life,” he said. “Even on bad days, I’m lucky to have bad days. With all of the turmoil going on in today’s world, it is easy to get caught up in the negative and focus on what’s wrong. I try to look at it more in a positive sense.”

In 2014, North was nominated to be Man of the Year by the Leukemia Lymphoma Society. In that role, he raised $50,000 for blood cancer research and named the research grant after Emmett Broxson, the oncologist who saved his life.

And on Jan. 20, the anniversary of his 13th year off of treatment, North collected toys and other items for the patients at Children’s Medical Center.

“I always tell myself I don’t want to get too far removed from the kid laying in the hospital bed looking out the window and seeing cars drive by and thinking, ‘Man, I wish I was one of them,’” he said.

After graduating from Sinclair in 2014, North enrolled at Wright State, embarked on the child-welfare track of social work, completed an internship at Montgomery County Children’s Services and earned his bachelor’s degree. He currently works as a graduate assistant at the university’s Social Work Office, is completing a social work internship at Dayton Children’s Hospital and is scheduled to get his master’s degree in the spring.

North feels like he can make the biggest difference by working as a social worker at the hospital.

“I hope to land at Dayton Children’s,” he said. “When I walk in, in a sense you’re going back to what was your home at one point.”