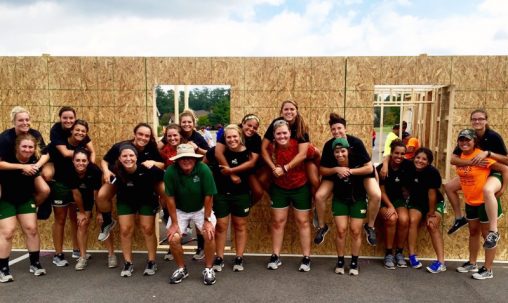 The Wright State softball team pitches in to help build a home for Habitat for Humanity in September.

The university was recognized in three categories:

“To serve the community is part of our culture at Wright State,” said Jack Dustin, interim director of service-learning and civic engagement. “The award is a tribute to our students, faculty and staff who truly want to make a difference in their communities.”

This is the eighth year Wright State has been named to the prestigious Honor Roll. It was the only university in Ohio named With Distinction for Education. Less than 20 percent of colleges and universities named to the list are awarded the Distinction designation.

Wright State’s commitment to service is campus-wide. A total of 13,676 Wright State students were involved in community service or academic service-learning during the 2014–15 school year, resulting in 1,495,561 service hours.

Examples of community service that helped earn the recognition include:

Wright State’s commitment to serving others is embedded in the heart and soul of the institution and supports its mission to transform the lives of its students and communities. It supports more than 70 designated service-learning courses and many more with service components, 500-600 tutors, an Engaged Citizenship Studies Certificate and a Youth and Community Engagement minor.

“Service-learning enhances the educational experience by giving students the opportunity to apply what they learn in the classroom to real community problems,” Dustin said. “It also helps prepare them to be engaged citizens once they graduate.”

The President’s Higher Education Community Service Honor Roll highlights the role colleges and universities play in solving community challenges and as a result, more students are likely to pursue a lifelong path of civic engagement that achieves meaningful and measurable outcomes in the communities they serve.