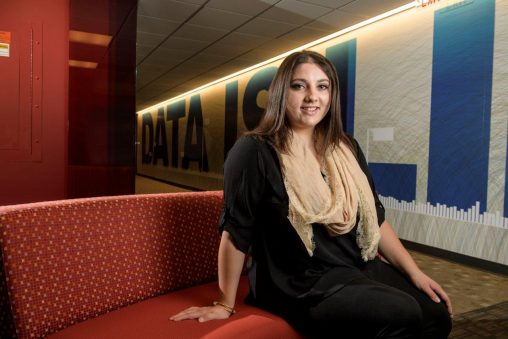 Sarah Tritle, a native of Springfield, enrolled at Wright State in 2013 to study supply chain management. (Photo by Erin Pence)

It was more than a little intimidating.

Wright State University business major Sarah Tritle was only one of four college students from around the country who attended the Sourcing Industry Group’s annual Global Executive Summit, which drew nearly 400 top executives and business professionals from around the world. Tritle’s trip was sponsored by Honda.

SIG provides thought leadership and networking opportunities to executives in sourcing, procurement and outsourcing from Fortune 500 and Global 1000 companies.

The three-day summit – held in Carlsbad, California, in October – featured 13-hour days filled with sessions on artificial intelligence, robotics, procurement and supply chain practices, millennial shifts in the workforce and other topics.

“Everything I’m learning here at Wright State is completely relevant because I was able to keep up with all of the sessions, all of the professionals, have an intellectual conversation with them and actually contribute to the conversation. That was really encouraging,” said Tritle, a senior in supply chain management at the Raj Soin College of Business. “Wright State is doing a really good job.”

Tritle also got a crash course in networking, learning how to approach people and develop a professional relationship. She also attended a session sponsored by the LatAm Alliance, which helps American companies start doing business in Latin America.

“There is a huge business opportunity there,” she said.

Tritle grew up in Springfield, Ohio, and was born in the house she has lived in her entire life.

Her father, Jerry, earned his bachelor’s and master’s degrees in business communications from Wright State, is vice president of business development at Peerless Technologies and an adjunct college professor. Her mother is an adjunct psychology professor at Clark State Community College.

Tritle was home-schooled until she reached fifth grade. Following graduation from Springfield High School, she did an internship in engineering at Wright-Patterson Air Force Base.

“I wanted to pick a degree program that was growing where I could do math, science, and have a different environment every day — talk to a lot of different people and not stay in a lab all day,” she said. “It takes all of the soft skills of business and adds in a lot of mathematical skills — quantitative analysis, business analytics, linear programming. And I’m really into all of the math.”

Tritle says supply chain management is a good field for women, who are increasingly populating its ranks.

“I think it’s because supply chain is such a broad business category,” she said. “You’re doing everything from operations and logistics to business analytics and negotiating procurement. From the articles I’ve read, it seems like women have those all-encompassing skills, and there is a huge need for that.”

Tritle recently completed a seven-month procurement internship in Marysville, Ohio, with the Scotts Miracle-Gro Co. and was given the responsibility of negotiating with suppliers bidding for Scotts’ business.

After graduation, Tritle would like to go back to Wright-Patterson and work for the Air Force Materiel Command, which acquires, manages and supports weapons systems for the Air Force. The command represents nearly one-third of the Air Force’s budget and employs more than 40 percent of its civilian workforce.

“My brother is in the Army and about to go active duty,” Tritle said. “I think it would be really cool that while he’s battling on the front lines, to be that supply chain manager in the background that gets the troops all the materials they need.”