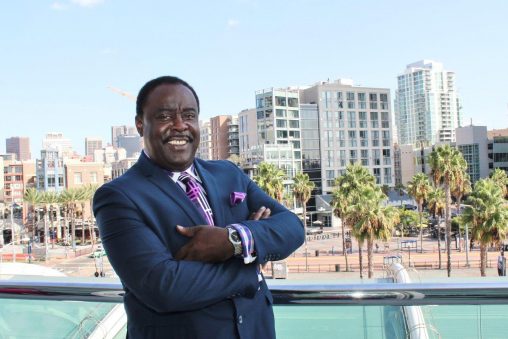 Stephen Hightower credits much of his business success to communication abilities he developed while a student at Wright State University from 1974-78.

A former Wright State University student who has built a petroleum-distribution empire was featured on CNBC-TV’s “Blue Collar Millionaires.”

“We think it may reach our market and may extend beyond our market,” said Hightower. “Good publicity is always good for business.”

Hightower, 60, wants to build his company, which currently has about 85 employees, into a billion-dollar business and extend its global reach. In recent years, the company has expanded into the energy efficiency business that includes commercial lighting, power generation and heating and air conditioning.

The CNBC episode was filmed in June and July in Middletown over three days — at Hightower’s business and home. Hightower plans to watch the show at a local Buffalo Wild Wings with his family and friends.

“This is a show that gives something positive to people who want to go out and live their dreams the opportunity to see others that come from little or nothing and actually be able to do it,” he said. “And it gives them the incentive or the confidence and vision that they can do it too.”

Hightower credits much of his business success to communication abilities he developed while a student at Wright State from 1974 to 1978. Majoring in management and communication, Hightower took part in speaking competitions that sharpened skills he would later use to build business relationships and sell his products and services.

“Being a competitive speaker is similar to being a competitive pianist — you become very, very good at it,” Hightower said. “It doesn’t matter what it is that you’re communicating or selling or managing, it’s how effective you are. And that effectiveness has served me very well.”

Hightower got lessons in human and race relations at a young age. When his became the first African-American family to move into an all-white Middletown neighborhood, family members eventually hired armed guards to patrol outside his house.

Hightower quickly became adept at what was a delicate balancing act — relating to, communicating with and connecting with both whites and blacks. This early insight into human nature coupled with his sales experience, speaking skills and determination to be his own boss would become the Hightower model for success in the business world.

Hightower advises people who want to go into business, and whose families already have small businesses, to follow in their families’ footsteps and then build and change the business as they see fit.

“We took a janitorial business and turned it into a construction business, which then turned into a petroleum business,” he said.

Hightower began with sales in the cleaning, construction and medical industries. Then in the 1980s, he founded Hightowers Petroleum, buying fuel from refineries, then selling and distributing it.

A big break came when he won a statewide contract from the State of Ohio, supplying gasoline and diesel fuel for state vehicles from Cleveland to Cincinnati. He was supported by BP in 1985 and became a contract carrier throughout Ohio.

“It’s an industry where you actually have to be let in,” he said. “The BP connection was a turning point where I changed from being a broker to a carrier in the industry.”

Then, Hightower began to do some innovative things. He prepared his company to do business electronically, enabling it to be among the first in line to sell fuel to the auto and utility industries via e-commerce as they moved from paper to electronic procurement management.

That put Exxon Mobil and Chevron Texaco in the Hightowers Petroleum supply chain and sparked the transformation from a regional to a national company. Winning a utility contract from Cinergy Corp. boosted Hightower’s business in Ohio, Indiana and Kentucky. When Cinergy was purchased by Duke Energy in 2005, Hightower’s reach was strengthened in Virginia as well as North and South Carolina.

Hightower does not confine himself to North America when it comes to drumming up new business. Nigeria, Jordan and Egypt have been among stops.

“One thing you find out early is that business is not going to find you, you’ve got to find the business,” he said. “I’m still the No. 1 salesperson, even though everyone in the company serves as salespersons. I spend my time creating relationships. And it is those relationships that allow us to continue to enjoy the growth we’re having right now.”

Despite his dizzying, world-travel schedule, Hightower finds time for other things.

His five children are a priority, and he has served as a trustee for the Wright State Foundation. He volunteers for projects that feed hungry children, mentors fatherless black children, and inspires and helps prepare young people to succeed in a global economy.

“Those are the things you try to do to make a difference in people’s lives,” he said. “When you’re growing your business and people think you have money and you really don’t, all you can do is give them advice and your time.”