In nearly five years of research for his bestselling book The Wright Brothers, McCullough came to know the brothers Wilbur and Orville Wright more closely than he knew his closest friends.

In a distinguished career of writing historical narratives such as Truman, John Adams—both of which earned him the Pulitzer Prize for biography—and, last year, The Wright Brothers, McCullough was able to play Peeping Tom on some of the great figures of history, he told a master class at Wright State on April 19.

“The letters the Wright brothers wrote in private correspondence, within the family almost entirely, number over a thousand in the Library of Congress. And none of them—none of the four, the father (Bishop Milton Wright); the sister, Katharine; and the two brothers—were capable of writing a short letter or a boring one. They were absolutely superbly written. We can go into their lives in a way that we can’t normally,” McCullough told the class. 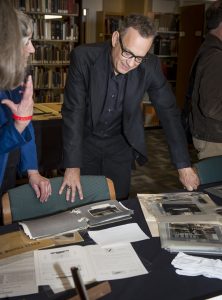 Born and raised in Pittsburgh and now living in Boston, McCullough returned to Wright State and connected with Hanks, who was dedicating the Tom Hanks Center for Motion Pictures and taking part in a fundraising gala for the university’s Rise. Shine. campaign.

During their visit to campus, Hanks and McCullough toured the archives and examined rare Wright artifacts that are part of the Wright Brothers Collection, one of the most complete collections of Wright material in the world. The collection includes the Wrights’ own technical and personal library, family papers, and other documents detailing the lives and work of Wilbur and Orville Wright and the Wright family.

The Wright family letters are important in helping us know Wilbur and Orville not only for what they did, but who they were, McCullough said. And understanding how individuals change history requires understanding how they live, he added.

“I think the Wright brothers are a lesson in history if ever there was,” McCullough said—not just in their invention of the airplane, “but how they went about their pursuit of purpose and the dedication they brought to their work, and the fact that they did not let failure defeat them. They could get knocked down, and they did in many ways, but they always got back up again, and they always learned from their mistakes or their failures.”