For the past nine years, the Dayton and Miami Valley Better Business Bureau has been on a business boom, and Wright State alumni John North and Sheri Sword are two members of the extraordinary team lighting the wick.

North and Sword careers have crossed numerous times over the past 26 years, since both were teachers assistants in the Department of Communication.

Sword worked as a bank teller and North worked nearby as a pizza delivery driver and would stop in to deposit his checks. Several years later North was CEO of a Dayton-area non profit and offered Sword a position that she turned down to work at the BBB.

“Little did we know, years later, I would be president and CEO of the BBB and our paths would cross again,” said North.

Now that the Raider duo are teamed up again, the Dayton and Miami Valley Better Business Bureau has benefited. 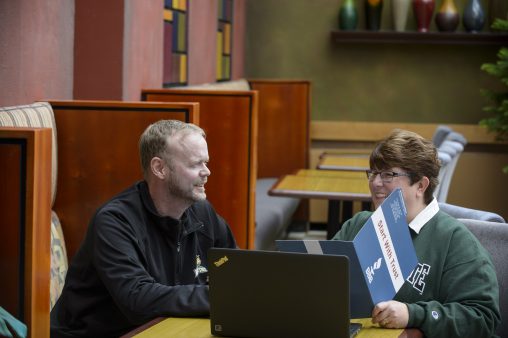 Under their direction, the number of Dayton-area accredited businesses has doubled from under 2,000 in 2007 to 4,000 today. “We are actually fourth out of 111 Better Business Bureaus as far as our penetration rate in our market,” said North.