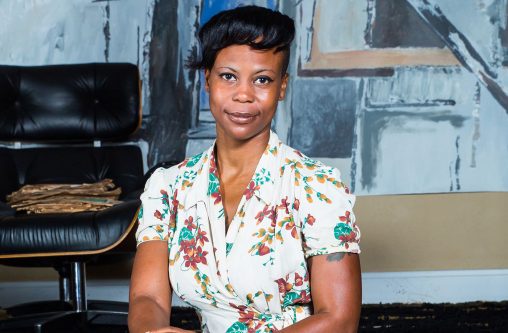 Hannah Beachler ’05 will discuss her work as a production designer following a screening of “Moonlight” on Feb. 19 at The Neon in downtown Dayton.

Beachler, a 2005 graduate of Wright State’s Motion Pictures program, will discuss her work and answer questions from the audience following a screening of “Moonlight” Sunday, Feb. 19, at noon at The Neon in downtown Dayton.

Tickets are $7.50 for adults and $5 for college students. Attendees are encouraged to buy tickets in advance. The event is sponsored by the Bolinga Black Cultural Resources Center.

W. Stuart McDowell, professor and artistic director of the Wright State Department of Theatre, Dance and Motion Pictures, will also participate in the talkback session with Beachler.

“She will bring her experience, wisdom and a reality check for our students,” McDowell said. “As well as being an inspiration to young female artists and workers in motion pictures, young African-Americans — a minority in motion pictures because it’s a white male-dominated industry — Hannah is blazing the trail for young, African-American, female production designers.”

She was also the production designer on “Moonlight,” which won the Golden Globe Award for Best Motion Picture, Drama, and is nominated for Best Picture in the Academy Awards.

She has worked as the production designer on “Miles Ahead,” a biographical film based on the life of jazz musician Miles Davis; “Creed,” the seventh film in the “Rocky” series; and “Fruitvale Station,” which won the Grand Jury Prize for Best Film and the Audience Award for Best Film at the Sundance Film Festival in 2013.

Beachler is currently working as the production designer for the new Marvel film “Black Panther.”

Beyoncé’s “Lemonade” centers on an emotional journey of feeling alienation and betrayal to ultimately extending forgiveness. Beachler said she interpreted the album as a way of “reaching back into a time period that was not a place that holds fondness for African-Americans. We wanted to flip it on its head, make it a place of knowledge and peace, which was also the best part about it.”

“I loved designing for a strong woman of color on such a bold, original artistic expression,” Beachler told Dayton Most Metro.

Beachler’s success in Hollywood is a reflection of her work while she was a student at Wright State. Her journey from Centerville to Hollywood has been one of passion and hard work.

“Her success has shined because of her willingness to be resourceful, giving a voice to something unique and finding her inner passion,” said McDowell.

“Moonlight” portrays the story of a young black man as he struggles to find his place in the world while growing up in a crime-filled neighborhood of Miami.

“It’s relevant to the human condition,” said Jonathan McNeal, manager of The Neon and a graduate of Wright State’s Motion Pictures program.

McDowell highlighted Beachler’s work on “Fruitvale Station,” with no budget, and “Moonlight,” which he described as one of the lowest budgets for a film ever nominated for best production of the year.

“It’s a narrative film, based on the experiences of the director and writer,” he said, adding, “It speaks to the issues of everybody. It particularly speaks to me, but it will profoundly speak to the black community.”