Courage for the future 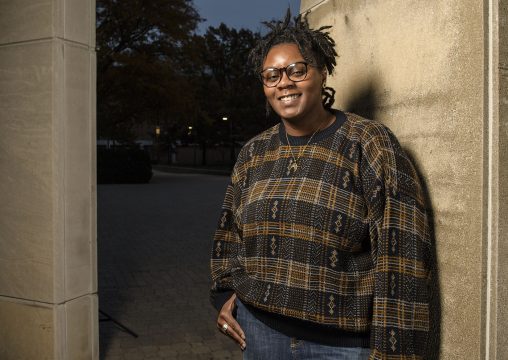 Brianna Brown, a senior majoring in crime and justice studies at Wright State, hopes to work with the FBI or help juveniles in the criminal justice system. (Photo by Erin Pence)

Raised on the west side of Dayton, Brown grew up in a law enforcement family and with the unique ability to understand body language.

“A lot of people in my family were police officers and my uncle was a state trooper so I grew up seeing that a lot,” said Brown. “And then I was always real inquisitive, wondering why stuff happened. I was really good at reading body language and I could tell how a person felt even at a young age.”

She applied to Wright State and was offered a full scholarship. It may have been because of her 4.3 grade point average in high school, which placed her in the top 10 of her class.

Brown pursued behavioral analysis to understand people’s thoughts and behaviors. After graduation, she hopes to work with the FBI or with juveniles on probation.

“A lot of people are unaware that the city of Dayton is number one for human trafficking and number one for heroin overdoses and heroin in the nation,” she said. “It makes you want to be part of something to do something better for your community. … If you know better, you do better.”

She interns with the Montgomery County Juvenile Probation Services, building relationships with children and young teenagers.

“I feel like a lot of the time juveniles get overlooked because they’re older kids, but those same kids are the adults in the criminal justice system now,” she said. “It starts with them being young and it goes into adulthood.”

Brown speaks with children who have witnessed a crime to learn about those involved and to understand how the crime impacted the child. Since many of the children and young teenagers she works with have committed crimes themselves, Brown has learned when to listen and when to speak as they are learning what is right and what is wrong.

“You can’t put yourself in their shoes because you can’t comprehend the foundations of their decision making,” she said. “You can be there as guidance, but you can’t tell them everything. They have a hard time listening.”

Brown keeps herself grounded with reminders of lessons she has learned, displayed throughout her arms and legs.

“Most of the tattoos have to deal with me growing and also learning about myself in the process,” said Brown. “I won’t put anything on me permanently if I know I’ll never need the reminder of those lessons later on in life.”

One of her tattoos consists of four black spirals that symbolize her willingness to grow through humility.

“When I was 16, my dad passed away from multiple drug overdoses,” Brown said. “So I grew up being mad at him. I had too much pride built against him. I didn’t want to build a relationship with him or reach out, but as I got older I realized pride is sometimes not a good thing to have. Just because I’m afraid to get hurt doesn’t mean I can’t be humble and learn from it.”

Brown is the only child of her father and mother, Michael-Ann, who has been chronically ill since Brown was 10.

“When I go and see her, her face lights up,” Brown said. “She just pushes on. She has the willpower and knows where she wants to be. I really admire her spirit, and I don’t know if I could do what she can do and come out OK.”

Brown describes her mother as a happy and bubbly person who makes her a priority. She gives Brown gifts every holiday, including Valentine’s Day and St. Patrick’s Day.

“She has always been my first Valentine,” Brown said.

Brown likes to write poetry, for which she has received many awards while in high school. She is working on publishing a poetry book. Her favorite poet is Nikki Giovanni, an African-American poet, author, activist and educator.