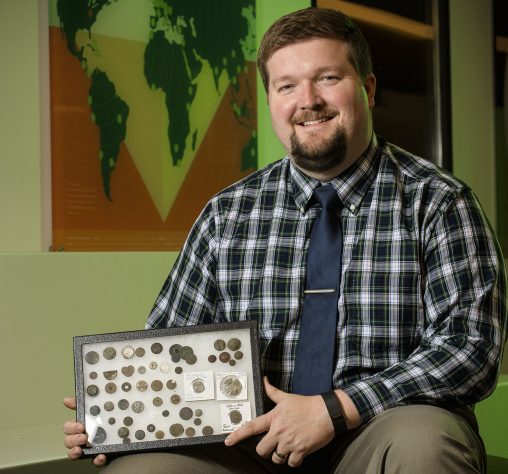 Jared Shank, who has degrees in geography and earth and environmental science from Wright State, searches underground for the past as a member of the Dayton Diggers metal detecting club. (Photos by Erin Pence)

In one hand a metal detector surfaces the ground for traces of metal. In the other hand a small handheld pinpointer more accurately detects the metal’s location deep within the earth.

Like an archaeologist using ground-penetrating radar to locate historical locations or artifacts, Wright State graduate Jared Shank searches the subsurface of farms and fields around the Miami Valley.

His experience serving in the military combined with his bachelor’s degree in geography in 2009 and master’s degree in earth and environmental science in 2013, give him a unique understanding of near-surface geophysics and its significant role in archaeology and metal detecting.

Shank serves as the group historian of The Dayton Diggers, a nonprofit organization that researches, recovers and documents history. The group partners with local historical societies, local governments and law enforcement agencies to locate lost items for personal or preservation purposes, or to find potential evidence such as shell casings, bullets, weapons or other objects.

Shank grew up near St. Paris, Ohio, and currently resides in Beavercreek. He attended Wright State with the intention of earning a degree in history, but was inspired to pursue geography after sitting in a geography course taught by Ken Lowrey. Shank’s interest in coin collecting and maps and his military background also drew him to the degree.

As a student, Shank was active in the campus veteran community and participated in a military strategic implementation team formed by the Ohio Board of Regents.

The year he received his undergraduate degree, The Dayton Diggers formed, and he served as its president from 2012 through 2015 before the birth of his first child, when he stepped down to become the group historian.

Shank served in the Army from 2002 through 2006. While serving in Afghanistan he witnessed fellow members using radar and landmine detectors.

“It’s more personal for me than it is a connection on a professional level,” Shank said about his involvement in the military and serving in The Dayton Diggers. “I was getting to see the benefit of this machine that I had never experienced and it was potentially saving lives.” 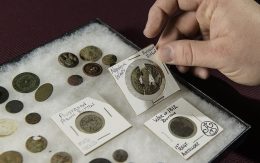 “There are lots of various outdoor activities being utilized to address PTSD and metal detecting is just one hobby that gets them outdoors and typically in a peaceful environment,” he said.

Many of the items metal detectorists find do not have much monetary value, but bring a personal or historical connection to the finder and owners, providing a better understanding of history and past culture.

The Dayton Diggers often find buttons, coins, cans, old business tokens and nails. Occasionally the group will locate odd items, including a silver dental bridge with intact teeth, a glass eye and a coin found in the same hole.

Shank once found two Austrian army buttons — one dating to the Napoleonic Wars and the other from the mid-19th century — a mile apart in two different fields. Shank believes that the buttons likely belonged to German immigrants who came to Ohio and were working in the farm wearing their uniforms when the button fell off.

“Military uniforms were and still are commonly worn as a type of work clothes when service members return home. Buttons often fall off as part of normal wear and tear,” he said.

Many of Shank’s military buttons are made of brass, bronze, copper and pewter. Several buttons he has found is date to the Civil War era. Other buttons include one featuring a horse, known as a sportsman button, likely belonging to an individual who owned and possibly showed a horse in the mid 1800s. One button has the name “Casey Jones” inscribed on it, as it was an old work clothing company who labeled their buttons. That brand was sold to Blue Bell and is known today as Wrangler, according to Shank’s research.

“I’ve gone to locations that were owned by the same family for a significant amount of time and dug up children’s toys, coins and items that were likely dropped by grandparents or great grandparents,” he said. “That means a lot to me to have any of those items potentially connect you to a past family member.” 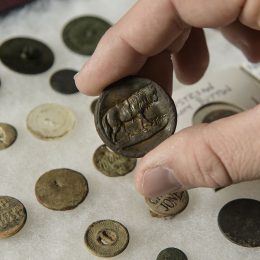 From years of detecting, Shank has discovered that gardens are a popular location for finding everyday metal items such as parts of old pocket watches.

His geography and earth and environmental science degrees compliment his metal detecting hobby by helping him understand the use of radar remote sensing and electromagnetics, which are used for archaeological purposes.

Shank can determine what the detector’s signals and pitches say about the type of metal and size of an object in the ground. Further, the frequency the metal detector uses is affected by soil conditions and influences the pitch of the beeps.

His geographic knowledge has helped him understand how to read old maps and how to connect them with modern maps by using a map overlay. This has helped the Dayton Diggers locate historical locations lost to time.

“That was a benefit I learned from my program that I didn’t realize would come in handy later for my group,” he said. “It’s been extremely helpful when a historical society comes to us and says ‘we want to learn more about a property and the house has been gone for 60 years, but it was somewhere out in the middle of a field.’ We can do a map overlay and get a close idea to where this house would be located.”