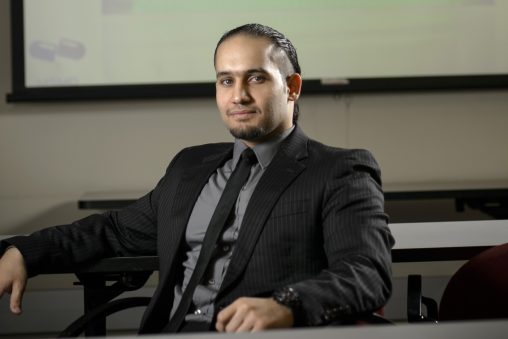 “An award-winning, fully automated medical device that was specifically invented to improve the quality of life for elders and those suffering from diseases by organizing, storing and dispensing medications at the right time and dosage with 98 percent accuracy.”

This was the introduction that Muhammed Hamdan used leading into his startup pitch during an Early Risers session at The Entrepreneurs Center in Dayton on March 24.

Hamdan, a second-year master’s student in the biomedical engineering program at Wright State University, formed a team of engineering students to take a napkin sketch of a novel medical device to a fully functional prototype during their senior year. They launched a senior design project of their own that has produced the Multi-Sensory Medication Dispenser, which could soon result in a Dayton startup company and revolutionize the way patients interact with their medication pills.

Hamdan’s 64-year-old father takes 13 different medication pills every day due to all the health problems he has, from an open-heart surgery to a kidney transplant.

“Sometimes my father forgets to take his pills, or he misplaces his bottles and we all start searching for them,” said Hamdan. “Sometimes he drops them on the floor and has to throw them away because they’re automatically contaminated, which will cause him to run short on his medications supply by the end of the month. It’s just insane to even consider all the hassle that my father experiences every time he starts fumbling through his many pill boxes. It’s a nightmare, and there must be a more efficient way for patients like him to manage their pills.”

Hamdan and his teammates started from scratch and spent nine months researching and coming up with the advanced circuitry and computer code that are mainly responsible for the autonomy of their medical device.

Hamdan worked on the project in a basement lab of the Russ Engineering Center at all hours, sometimes as late as 3 a.m. He taught himself how to write computer code and spent spring break writing more than half of the primary code for the device — 6,421 lines.

There were so many challenges that Hamdan nearly gave up on the project.

“Up until the night of our final presentation and demo, I was still in the lab fixing problems with the circuitry and debugging the code. It almost gave me a heart attack,” he said. “But we didn’t only manage to make it on time, but also competed and won awards with it.”

Hamdan presented the idea to business and technology leaders at The Entrepreneurs Center in hopes of finding investors and partners to help him carry the project forward. He walked away with 21 different business cards from medical professionals, software engineers and marketing experts.

“It was amazing,” he said afterwards. “This is the connection point. This is the bridge. And this is exactly what I’m here for.”

Hamdan grew up in Amman, Jordan, and when he moved to Dayton in 2009, he didn’t speak English.

But he worked hard, went on to graduate from Beavercreek High School and then enrolled at Wright State. 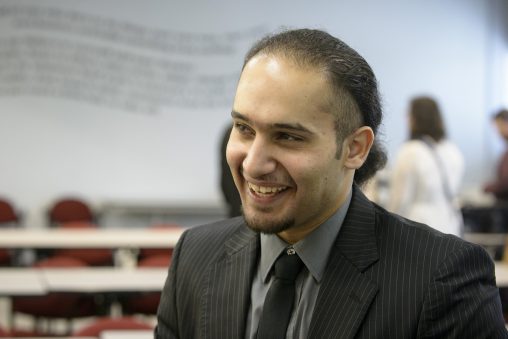 In 2016, he obtained his bachelor’s degree in biomedical engineering and is scheduled to graduate later this month with his master’s degree, focusing in medical imaging and signal processing. He has a perfect 4.0 GPA and hasn’t gotten a grade lower than an A since his junior year of high school.

“I don’t remember what B’s taste like. It’s been too long,” he said.

Hamdan is an engineering intern at Cradle North America Inc., a Beavercreek-based computer software-simulation and services company that specializes in numerical analysis. He is also a graduate research assistant at Wright State’s Ergonomics in Remote Environments Laboratory, which conducts research on human-machine interaction and applications in enabling technology for minimally invasive surgery.

“I’ve always been fascinated with technology and the digital world that we live in,” he said. “And I really wanted to bring something new from technology to the medical field and help people with it.”

His dreams are on the verge of coming true with the Multi-Sensory Medication Dispenser.

The device, whose development is 85 percent complete to be ready for mass production and commercialization, is designed to automatically sort, organize and store medication pills in compartments through a user-friendly and highly accurate interface, and then dispense them at the right time in the correct dosage. The device is equipped with a multi-sensory alarm system and a unique dispensing technique that can handle all types of medications of all shapes, sizes and weights.

“Considering that I know exactly where further enhancements can take place and with a little help from senior engineers in the medical device industry, I’m confident that a 100 percent accuracy rate can be easily achieved,” Hamdan said.

The dispenser would be marketed primary to elderly patients. A secondary market would be hospitals, clinics and nursing homes. He estimates that the device would cost $82 apiece to manufacture, but could command at least $499 because of the hot demand in the $5.5 billion market of medication dispensers.

“Compared to other devices in the market, this is already a killer deal for the shoppers,” he said. “They’ve never seen something like it before, and they’ll truly needed it once they hear that it exists.”

Hamdan said he learned more in four months working on the project than he learned in the previous four years of class lectures.

“When we showed the campus community the powerful capabilities of the device, its complex circuitry and the advanced code embedded in it,” he said, “they were wowed!”

“The healthy atmosphere that the College of Engineering and Computer Science provides its students with — whether it is classrooms, office visits or even advising sessions — enables the students to excel in their fields,” he said.

His advice to students is to take full advantage of the opportunities provided, both on- and off-campus, make all sorts of connections with people they meet and explore what else is out there in their fields. He said it is always worth going the extra mile.

“There’s enough time for everything, if you truly want to make the time for it. Manage your time properly and make it a routine to learn and explore a new thing every day,” he said. “Because when you’re done with school and ready to jump into the industry, they will want to know what else you’ve been doing besides school. Work hard and pack your resume with all the goodies so you shine in the end.”