Dancing with the star 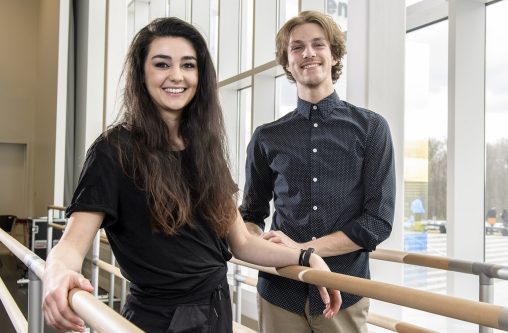 It was during a casual drive out to lunch that it happened. Dwight Rhoden, an internationally acclaimed dancer and one of the most sought-after choreographers in the business, had just finished a set of rehearsals with Wright State students on campus.

Gina Walther, associate professor of dance, was driving. And when she heard Rhoden say that he liked the Wright State dance students so much that he wanted to offer two of them scholarships to one of his summer “intensives,” she couldn’t believe her ears.

“I was really surprised and pinching myself,” Walther recalled. “I couldn’t wait to tell them.”

“I am extremely excited, but also extremely nervous,” said Shade. “I feel it’s going to be a really awesome thing just to be immersed in a world of things I never saw myself doing.”

A native of Dayton who began dancing at age 17, Rhoden has performed with Dayton Contemporary Dance Company (DCDC), Les Ballet Jazz De Montreal and as a principal dancer with Alvin Ailey American Dance Theater. His work has been presented in more than 20 countries, filling some of the most prestigious theaters around the globe.

Walther, who worked with Rhoden in the 1990s dancing in several of his pieces with DCDC, said his internationally acclaimed Complexions Contemporary Ballet is one of the hottest dance companies on the planet and that she had dreamed of bringing Rhoden to Wright State ever since she started working at the university.

“He has an exacting eye as a choreographer, but is also nurturing,” she said. “His choreography is incredibly challenging. It’s not easy.”

During rehearsals, Rhoden watched Blake do a 4.5-minute duet and saw potential in both her and Shade, said Walther. At the two-week “intensive” in Los Angeles, they will take ballet and nique (technique) classes and will be involved in rehearsals as well as a small performance.

“It’s very prestigious,” said Walther. “What I think is so special about his choreography is that it really marries form and feeling. His work is technically probably the most challenging you will ever do or have ever done. But it also has great heart and feeling to it. I think it will help their dancing in all of the classes.”

Blake, a junior, grew up in Toledo. She started dancing at age 6 because one of her friends was taking classes and she later graduated from the Toledo School for the Arts. She came to an “intensive” at Wright State when she was in high school and was impressed with the faculty.

“The way he moves — it’s completely different than what is called concert dance,” she said. “I feel it has more of a meaning.”

Blake expects the “intensive” to be a great memory and enable her to further develop her dance skills. After graduating from Wright State, Blake would like to join a dance company and travel and eventually become a choreographer.

Shade, a freshman, grew up in Lebanon, Ohio. He began dancing at age 13, taking a recreational dance class at the urging of a friend. He later attended the Butler Tech career center in Hamilton, which had a dance program. He came to Wright State intending to major in English, but attended a dance audition and got a scholarship.

After graduating, Shade would like to be part of a dance company doing concert dance, do some ensemble work in traveling shows and eventually teach choreography.