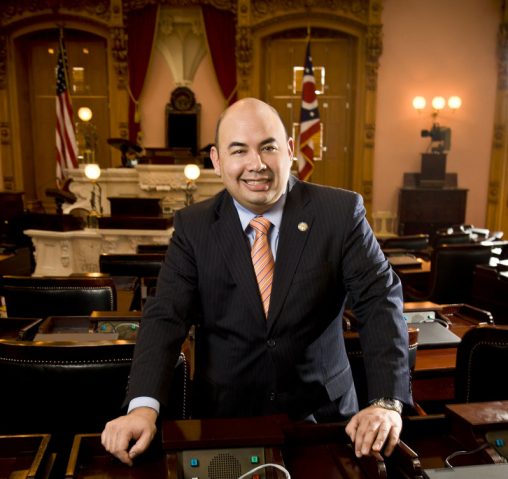 Cliff Rosenberger, the speaker of the Ohio House and a 2012 Wright State graduate, will give the commencement address at the spring graduation ceremony on April 29.

Cliff Rosenberger, the speaker of the Ohio House of Representatives and a 2012 Wright State University graduate, will give the commencement address at the university’s spring graduation ceremony.

The ceremony begins at 10 a.m. on Saturday, April 29, in the Wright State Nutter Center. Tickets are not required. The class of 2017 includes more than 2,100 graduates.

“I’m looking forward to coming back to Wright State University and recognizing the class of 2017 for their tremendous accomplishment. Graduation is obviously an exciting occasion for the students and their families, so it is a thrill for me to be able to spend part of the day with them,” Rosenberger said.

Rosenberger was first elected Ohio House speaker in 2015. He is serving his fourth term in the Ohio House and represents the 91st House District, which includes Clinton, Highland and Pike counties, and parts of Ross County.

Prior to being elected, he served as the national political events coordinator for Mitt Romney’s presidential campaign, as special assistant to U.S. Interior Secretary Dirk Kempthorne and staff assistant political coordinator in the White House during George W. Bush’s presidency.

Rosenberger received a bachelor’s degree in urban affairs from Wright State in 2012. As a student, he participated in the nationally recognized Model United Nations program.

Rosenberger has a long tradition of civic accomplishments with leaders of his hometown of Clarksville. He helped establish a village planning commission for Clarksville and led a movement to establish a Clinton County Veterans’ Memorial in Wilmington. He also served as the representative for the village to the Clinton County Republican Central Committee from 2004 to 2010.