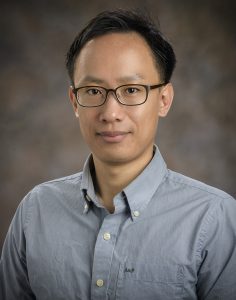 Though cancer treatments have advanced somewhat in our time, the methods still commonly used on patients are very harsh. These include invasive surgeries and chemotherapy.

“Cancer treatment is still premature in that, basically, you open up patients and cut wherever the cells are and then treat them with very toxic drugs,” said Kwang-Jin Cho, assistant professor of biochemistry and molecular biology at the Wright State University Boonshoft School of Medicine and in the College of Science and Mathematics. “That doesn’t make sense. We’re shooting rockets to the moon and all this advanced stuff, but there’s still this open-cut-close phase to treating cancer.”

Cho is working to find better anti-cancer drugs in his lab so that such harsh treatments aren’t as necessary. His findings will be especially significant for treating pancreatic, colorectal and lung cancers.

Cho’s study depends on the workings of a protein, K-RAS, a member of the three RAS family proteins. Oncogenic mutations of the protein can be found in about 15 to 20 percent of all human cancers. It is found in about 30 percent of lung cancer patients and 40 percent of those with colon cancer. In pancreatic cancer — one of the most difficult to survive — 90 percent of patients have the mutated protein.

“RAS protein is like an accelerator in a car. When you hit on the accelerator, the car goes ‘vroom.’ It goes fast. It’s the same with RAS,” Cho said. “It’s a switch-like signaling protein. When it’s active, it stimulates cell growth.”

When RAS is functioning the way that it should, cells divide normally. If it’s mutated so that it becomes always active, cells undergo uncontrolled cell growth, also known as cancer. By studying anti-cancer drugs, the hope is to find treatments that can inhibit the K-RAS-driven cancer cells without harming normal non-cancerous cells.

“Our approach is, instead of making from scratch chemical compounds, we use what nature made for us,” Cho said. “We culture different types of microbes such as bacteria and yeasts, different tree plants, sea sponges and sea weed.”

Because K-RAS must interact with a cell’s plasma membrane for its biological activity, he is looking for compounds that disrupt this interaction using a high-resolution microscope that images 96 culture wells in just one hour.

Cho also is considering various drugs, including some that already have approval from the Food and Drug Administration. The drugs have already been deemed safe for humans and could therefore reach patients faster than new drugs.

Throughout his studies, Cho has evaluated more than 5,000 compounds searching for ways to inhibit oncogenic K-RAS activity. He already has a few promising leads. These include metformin, a drug to treat type 2 diabetes, and sildenafil, a well-known drug that treats erectile dysfunction.

Cho was understandably surprised at the find. His goal is to make similar finds in the future.

“I hope we can find, just like Viagra, the drugs that are already out there and then repurpose them for cancer,” Cho said. “We’d cut down so much time and save money because animal testing is so expensive, and it’s safe for patients because it’s already been given to many.”