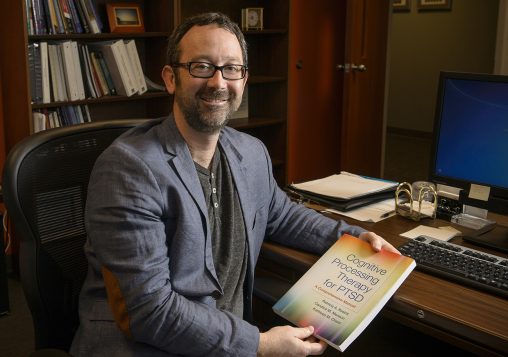 Jeremy Schumm, an associate professor at Wright State’s School of Professional Psychology, will work with Canadian clinicians to provide PTSD therapy to military veterans. (Photo by Will Jones)

Military veterans in Canada suffering from posttraumatic stress disorder will soon get the benefit of training from Jeremy Schumm, an associate professor at Wright State’s School of Professional Psychology and an expert on cognitive behavioral therapy.

Schumm, who joined the faculty in October, has been asked to take part in a two-day training session at Ste. Anne’s Hospital in Montreal at the end of May for the hospital and Canadian Armed Forces clinicians there. They want to adopt a model used by Schumm when he was associate director of the PTSD program at the Cincinnati VA.

PTSD is a serious condition that can develop after a person experiences or witnesses a traumatic or terrifying event in which serious physical harm occurred or was threatened and causes intense fear, helplessness or horror. An estimated 44.7 million Americans struggle with PTSD. Symptoms include disturbing thoughts, feelings or dreams related to the traumatic events.

“They are seeing similar types of issues in their military that we see,” Schumm said of the Canadians.

Schumm has a model on how the Canadian VA can use cognitive processing therapy systemwide. And after the training session, he will do follow-up consultations, offering tips about effectively delivering the therapy.

The long-term goal is to give Canadian military veterans the skills to cope with PTSD, reduce the number of PTSD-related suicides and enable PTSD victims to function as productive members of society at work, school and home.

Schumm said the therapy has been proven to work.

Schumm grew up in St. Marys, Ohio. His father, Greg Schumm, worked as the associate dean of Wright State’s Lake Campus before retiring.

After graduating from St. Marys High School in 1995, Jeremy Schumm earned his bachelor’s degree in psychology from Wright State in 1999 and in 2005 obtained his Ph.D. in clinical psychology from Kent State.

In graduate school, he became interested in traumatic stress. Seven out of 10 people at some point in their lives will suffer an event that will traumatize them such as serious injury, sexual assault, combat or death of a loved one.

Schumm was introduced into doing PTSD work with the military when he interned and was trained at the National Center for PTSD at the Boston VA. His research area of interest is the overlap of PTSD treatment and substance abuse disorder treatment.

Schumm has conducted multiple national trainings for the U.S. VA and Armed Forces. He is the only national master trainer for both cognitive-behavioral conjoint therapy for PTSD and for behavioral couples therapy for substance-use disorders.

Schumm says most victims of traumatic stress recover naturally by using their social support systems to cope. But things can go awry when they keep their emotions bottled up.

“By avoiding and not discussing, it doesn’t give you the opportunity to make sense of what happened,” said Schumm. “The memory and understanding of the event starts to become fragmented, sometimes the victims come to blame themselves, and that can interfere with recovery.”

One version of cognitive behavioral therapy is cognitive processing therapy, which teaches people how to recognize unhealthy thoughts, or “stuck points,” in trying to make sense of the trauma.

The therapy enables trauma victims to change their perspective and think about the trauma in a different way, such as being able to see that the perpetrator was the responsible one and there is nothing that the victim could have done to prevent it.

Such therapy can be effective and effectively quickly, involving as few as six sessions.

“We’re not talking about years of recovery,” said Schumm.

If victims can’t get professional help, they should turn to social support, talking to friends and family about their issues.

“You really need to share your emotions,” he said.

Friends and family should encourage them to talk without pressuring them. And they should not send messages that somehow the victim is to blame or should have done something differently.

Schumm hopes to develop a specialty clinic at Wright State’s Duke E. Ellis Institute for Human Development to treat PTSD and other trauma-related disorders. The Ellis Institute is a 30,000-square-foot facility that houses clinical training and research space for Wright State’s doctoral program in clinical psychology while serving as a clinic for underserved Dayton-area residents.

Schumm says victims of PTSD often use alcohol or drugs as a way to try to cope.

“The research shows very clearly that if you do not treat the PTSD, their ability and likelihood of staying sober and clean from alcohol and drugs is greatly diminished,” he said. “So if we can fold that in and provide very specific evidence-based treatment that’s highly effective, that would be a real benefit to our local community.”