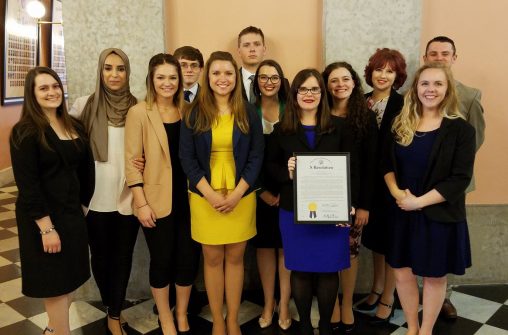 Wright State University’s Model United Nations team was recognized by the Ohio House of Representatives on May 24 for its exemplary performance at the 2017 National Model UN Conference.

Representing Italy, the Wright State team was named an Outstanding Delegation — the highest honor — at the conference, which took place in New York City on March 19-23.

“These honors are a justifiable source of pride not only for the members and their mentors but also for the entire WSU community,” the House resolution states.

The resolution also highlighted the team members’ maturity, determination and motivation. “Their impressive accomplishments reflect a bright, promising future for each of its members, who have proven that they are tomorrow’s ambitious leaders,” the resolution states.

The House resolution was sponsored by Rep. Rick Perales, who represents the 73rd House District, which includes the western portion of Greene County.

“I’m grateful to the representatives who agreed to support us today, and I am so proud of our team being recognized in the national conference, but there is something special about being recognized so highly in our home state,” said Amanda Baker, one of the team’s head delegates.