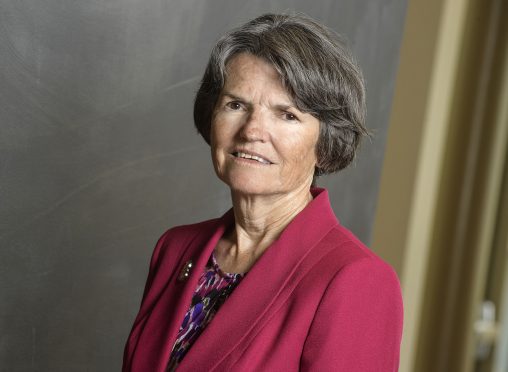 Even in retirement, long-time accountancy instructor Maggie Houston continues to place the welfare of her students above all else. (Photo by Erin Pence)

When she arrived at Wright State University in 1982 to study accounting, Maggie Houston was anything but the typical college student. She had worked at the U.S. Embassy in the tiny Indian Ocean nation of Mauritius and then spent time in Nigeria and Iran, just before the Iranian Revolution and overthrow of the shah.

Her aptitude for numbers prompted her to study accounting at Sinclair Community College after moving back to the States. She then transferred to Wright State, where she would earn her bachelor’s degree in finance and her master’s in business administration with a concentration in accounting.

In the process, Houston became an accounting rock star.

She passed the Certified Public Accountant exam with the highest score in the state of Ohio and the Certified Management Accountant exam with the highest student score in the nation. After interviewing with the biggest, most prestigious accounting firms in the country, she was hired by the Deloitte, Haskins and Sells accounting firm in Dayton.

But she later opted for an “off-ramp” year from the accounting firm to raise her family. She began teaching accounting at Wright State, first as an adjunct and then a full-time instructor. That off-ramp year led to 29 more.

“When I came here, I found my calling,” said Houston, who retired in April. “I did not have a job here — I had a vocation. It just made all the difference in my life.”

Born in upstate New York as one of seven children, Houston moved to Phoenix when she was 5. After graduating from Phoenix Central High School, she spent a year working in Belgium and France, where she learned French. She was recruited by the U.S. Department of State because of her French skills, moved to Washington, D.C., in 1970 to work in the Foreign Service office and then was stationed at the U.S. Embassy in Mauritius, the French-speaking nation 1,200 miles off the southeast coast of Africa.

At Wright State, Houston was known for placing the welfare of her students above all else. Whether it was convincing them to major in accounting, introducing them to recruiters, telling them about internships, helping them navigate crossroads in their lives or simply providing a shoulder to cry on, she was always available.

“She was an outstanding teacher in the classroom, but she was really good at watching her students, seeing who needed a little more help with some things,” said James Greenspan, chair of the Department of Accountancy in the Raj Soin College of Business. “Beyond that, she maintained excellent ties to the business community. She was so well respected that for many of our students she could just pick up the phone and recommend them for internships and jobs. I can’t tell you the number of students that she has gotten started onto professional careers.”

“She saw it as a priority to reach out to underrepresented students in the profession,” he said.

Houston and her family have established a scholarship designed to help nontraditional female students who come to Wright State from two-year colleges to earn a four-year degree in accounting. The Houston Family Scholarship is expected to pay $1,500 a year.

“For almost everyone going from two-year to four-year, money is an issue,” said Houston. “The scholarship right now doesn’t pay very much, but it would take the edge off and kind of says, ‘Welcome. Come to us.’”

Even in retirement, Houston plans to keep giving back, possibly in the areas of hunger and food insecurity.

“I would like to continue to make a difference in a different way,” she said.